Is privacy really an innate human desire?  Is it normal to want to be alone?  While it seems intuitive and logical to assume that our culture and technology have evolved in response to a basic human desire for privacy, anthropologists, as well as communication and cultural theorists have argued that the cause and effect are the other way around.   Our habits, customs, created environments and mindsets are not a response to a primordial human need.  Technological culture created the idea of and need/desire for privacy. 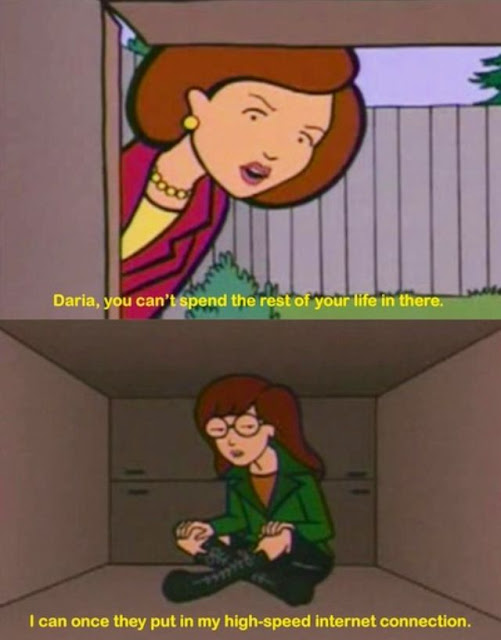 In oral societies (that is, societies which depended on direct person-to-person oral communication), the desire to be alone was immediately identified as a symptom of illness.  In a world dominated by orality, today’s millennial otaku introvert generation would have fared as either deities or as mad demons.  They might have become the oracles living in caves at Delphi or the first monks dedicating their lives to transcribing ancient scripts or they would have been imprisoned, starved, tortured and burned at the stake.  We should also consider, given cultural ecology’s displacement of natural environment, that the neurodiverse, digi-destined, screen-slaver generation might be the next step in the evolution of our species.

Privacy is a byproduct of the visual culture created by the development of literacy from basic forms of writing to the phonetic alphabet, to Gutenburg’s printing press to the digital universe we know today.  Reading meant it was possible to be alone and still be connected to the world in important, informative ways.  In fact, the most serious forms of communication and knowledge-gathering were, in this new visual/ literate culture, best done in solitude.  In an oral culture being alone meant you could only be talking to yourself or a god—both of which were suspect if not dangerous activities.

Living in spaces that have one room for cooking, another for sleeping and another for gathering might seem “natural” to us now, but our early ancestors would be mystified by our insistence on compartmentalizing our daily activities. Primitive man might have agreed with the dysphemistic adage that “You don’t shit where you eat,” but beyond the scatological, compartmentalized privacy is cultural not natural.

No doubt our primitive ancestors at times needed to be out of view, literally in hiding from enemies and predators, as a matter of security. Hence the overlap and confusion between privacy and security, between solitude and survival.

A Gun or an Iphone:  Which is more dangerous?

Fast forward to the debate between the FBI and the Apple Corporation about unlocking the iPhone once used by the ISIS-inspired murderer who killed 14 people in San Bernardino. On the surface, the request is to access one iPhone, but the reality is clear that the FBI is asking for the ability to access all iPhones.

The debate is being couched in terms of individual privacy and public security but this is a false dichotomy.  All things being equal (and they never quite are) security trumps privacy.  (And the pun is intended since Republican presidential aspirant Donald Trump [a.k.a Drumf] has already declared that all Americans should boycott Apple.)  History has proven over and over again that this debate is between individual security and collective security; a debate closely tied to the more typical dichotomy of individual rights versus collective rights. In the American context the priority line between collective versus individual rights and security tends to slide around like the dial on old-fashion radio gone wild depending on the issue--abortion, gun ownership, medical insurance, seat belts, drugs, homosexuality, same-sex marriage, civil rights, equality for women, and so on. During debates for the Republican presidential candidates, President Obama was chastised for using the San Bernardino shootings as an opportunity to challenge the Second-Amendment rights of American citizens to "bear arms."  In this mindset a locked cellphone poses a much greater hypothetical threat to public security than an assault rifle and thousands of rounds of ammunition.

NSA, CIA and you:  Who has the right to have secrets?

In his autobiography, Playing to the Edge: American Intelligence in the Age of Terror,  Michael V. Hayden, former director of the NSA and the CIA, points out that "Stellarwind," the CIA program to gather data on Americans' telephone calls which was outed by Edward Snowden,  “did indeed raise important questions about the right balance between security and liberty.”

In his review/commentary of the Hayden autobiography, "Can You Keep a Secret?", New Yorker staff writer George Packer points out that last week Hayden "sided with Apple in its privacy dispute with the F.B.I." while continuing to tacitly support the CIA's programs of torture and human-rights abuses.

In his review, Packer comments:

Spooks in general have had a lot to answer for in the past decade and a half: the 9/11 attacks themselves, Iraq’s nonexistent weapons of mass destruction, secret prisons, torture, warrantless eavesdropping, the bulk collection of Americans’ data, and targeted killings.

With this recent history in mind, it seems obvious that individuals, as a matter of personal security, need to protect themselves not just from malfeasance but the mistakes, the callous indifference, the questionable ethics and the politically/ideologically-dictated overreach of secret and secretive police forces like the NSA, CIA and FBI.