On Swearing an Oath of Allegiance to Chuck 3

We Anglo square-heads from the ROC (Rest of Canada) tend to be very slow to acknowledge Quebec's leadership.  Still we turn to Quebec as the model for maternity/paternity leave and government supported day-care.  News programming on Radio-Canada (the French side of CBC) has long stuck me as superior to its English Canadian equivalent. I've been told this is so because of asymmetrical funding:  Quebec gets more than its share of CBC money.  Actually, this tends to be the English Canadian explanation for anything Quebec does better than other provinces.  My admiration for Radio- Canada, I suspect, has to do with the fact that Quebec journalists occupy an interstitial space between Quebec and the rest of Canada, and therefore manage, now and then, to escape the dominant narrative being dictated by the corporations which supply the news feeds.

"Quebec Is a nation":  Is Canada a nation?

Quebec has even managed to instill a sense of pride in its distinct language and culture among its citizens young and old. In Selling Illusions: The Cult of Multiculturalism in Canada (1994), Neil Bissoondath described "English Canada..." as "adrift with no sense of its centre" whereas "Quebec redefined its own centre, strengthened it, sought to make it unassailable" (196). (See Constructing English Quebec Ethnicity.) I have not unequivocally supported every piece of legislation ever passed in Quebec. However,  I do see that actively promoting the "imagined community," as Quebec has done, would be a good idea for the Canadian nation as well. In a country like Canada which doesn't make any obvious sense, whose existence is challenged by geography, ethnicity, economics and politics, an independent, richly funded national news service makes perfect sense.  A service dedicated to telling Canadians about Canada and other Canadians seems a minimal requirement for keeping the country together but we are told that we can't afford it.  Can it possibly be true that Canadians just aren't interested in Canada? 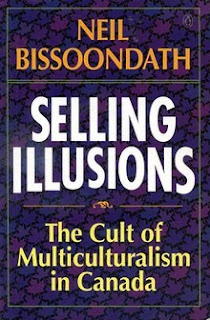 Once again Quebec leads the way as Québécois politicians in the National Assembly and the House of Commons are challenging the obligation to swear a solemn oath of allegiance to King Charles III.  The timing is perfect.  Henry VIII set the bar pretty low for how an English monarch treats his wife. Still, I, like most people in the English-speaking world and beyond, can't imagine fond fealty for the King who made Princess Diana so miserable.

"As required by the constitution" is the catch phrase being repeated in the brouhaha over the swearing of allegiance to Charles. True enough, but most Canadians (myself included) might imagine that the Constitution being referred to is the document rewritten in 1982.  In fact, our Constitution is still largely a remnant of our colonial history,  the Constitution Act (aka British North America Act) of 1867.  In 1982, we "repatriated" the Constitution, meaning we gave ourselves or the British gave us (tomato/tomaato) the right to amend our Constitution.  We added the Charter of Rights and Freedoms but, apparently, we still haven't gotten around to amending a lot of outdated passages including those related to the "Oath of Allegiance."

The aforementioned "Fifth Schedule" is an even more quaintly anachronistic statement of obligations and qualifications:

I A.B. do swear, That I will be faithful and bear true Allegiance to Her Majesty Queen Victoria.

Note. — The Name of the King or Queen of the United Kingdom of Great Britain and Ireland for the Time being is to be substituted from Time to Time, with proper Terms of Reference thereto.

Did you skip reading the qualifications?  You missed the best part. Here's the short version: you must have property, four thousand dollars of wealth, and not be a nouveau-riche social-climber who bought property just to become a Senator.  I have gone searching and can find no evidence that this "Declaration of Qualification" has been amended.

The Constitution of Canada is a slippery beast!

I was prepared to give myself the task of reading the complete long, boring, official text of the Canadian Constitution.   It's what I do, right, on behalf of my readership (i.e., mostly the guys I play golf with). In this case, I have been unable to find an "official" complete-text document online.  There are endless opportunities to download The Charter of Rights and Freedoms which was added to the constitution in 1982, and boundless discussions about the Canadian Constitution but, so far, I, a Canadian citizen have been unable to find an official complete copy of the text itself, the document which is supposed to be "the" most important text in the country, spelling out the rules that govern us and our political representatives.  What I found in a couple of sources is that part of our Constitution is written, and much of it is unwritten, based on custom and tradition, and underlying assumptions like that we believe in democracy, justice and equality. 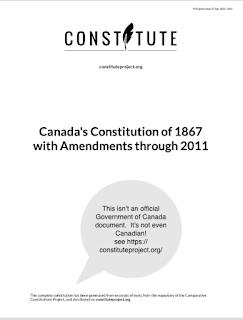 Reading parts of the Constitution, like the "Declaration of Qualification" above, I thought, "This archaic language cannot be what is governing us in the third millennia!"  But apparently it is.  The argument by analogy I found on a constitutional-studies website is that "Even though parts of the Constitution are centuries old, it has been referred to as a 'living tree' because its meaning can evolve over time as society changes."  Presumably based on this "living tree" analogy, the House of Commons website claims that "When a Member swears or solemnly affirms allegiance to the Queen as Sovereign of Canada, he or she is also swearing or solemnly affirming allegiance to the institutions the Queen represents, including the concept of democracy."

I get the argument, to a degree, that we "reinterpret" the Constitution over time.  But the idea that swearing allegiance to a King, the anathema of democratic principle, is actually "affirming allegiance to [ . . .] the concept of democracy" is a stretch too far.  The Monarch is an icon of privilege as birthright, of wealth and social inequality; in other words, a denial and denigration of all those values which we supposedly aspire to these days.  We are told that our Senate, our Governor General and our Monarch are "only" symbolic offices.  That's a lot of expensive symbolism for a country that can't afford a public broadcasting system. And, of course, they are "only" symbolic until they aren't, and the Constitution becomes "the letter of the law." (See The King-Byng Affair.)

I understand that for the UK the royal family survives as media celebrities and a tourist attraction.  I have no objection to the British maintaining the royals along with Harry Potter and Hogwarts Castle, in competition with Mickey and Donald and the Kardashians in the USA, but the oath is diminishing for Canada and Canadians.

The Poetry of Quebec resistance

Reading the history of the Oath of Allegiance, I thought, "How poetic--poetic justice, in fact--that Quebec, a historically Catholic province, is leading the protest against an oath of allegiance to King Charles."  The oath did not exist in medieval times. The oath became required with Henry VIII's Act of Supremacy in which Henry split from the Catholic Church and named himself head of the Church of England.  The Act was briefly repealed then declared anew by Henry's daughter, Queen Elizabeth I.  To this day, the English monarch remains head of the Church of England even if he happens to be an adulterer, divorced and married to his mistress. As pointed out on the House of Common's website: