In an earlier post I described money as “pixel dust.” I was being cute—way too cute! Sometimes an analogy can hide much more than it reveals. Money is not created by Tinker Bell, though I did feel a bit smug upon realizing that the writers of the Zeitgeist film series repeated my observation that when you take out a bank loan you create that debt out of nothing. 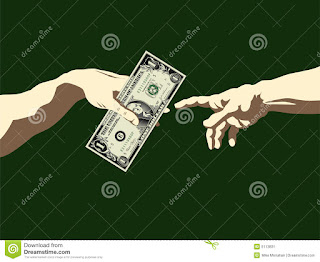 Banks have the right to create money, but they need your help

The bank does not have the money it is lending you. Stop and think about that for a moment, because it is the answer to the question “how is money created?” As more and more people struggle to understand bitcoin, the fact that money is just a way of recording debt is starting to sink in. When I googled the question “how is money created?” I was surprised by the number of sites covering the question—the number of people who knew the answer. I found myself asking, as I often do, how could I not know this? Shouldn’t every ten-year-old know the answer to this question?  Every time you take out a loan for a house or a car or an education, or buy a cheeseburger with a credit card, you create money--those pixels on a computer screen somewhere that are the reason you work and save and struggle.


The Federal Reserve gives banks the right to create money

In the USA the Treasury prints the money, but the amount of printed money is less than three percent of the total money supply in the system. Actually no-one really knows how much digital debt (i.e. money) there is floating around on the internet and in the intranet systems of all the banks and financial institutions in the world. We know, as I pointed out in my earlier post,

The rules for creating money

The Federal Reserve is the moolah machine, the institution that creates money and runs the monetary system.  It is the model for and has tentacles into just about every central bank in every country in the world.  The cynical, conspiratorial answer to the question is that the Fed is a bunch of bankers, a cabal of the CEOs from the biggest banks and financial institutions in the world. According to the Zeitgeist movement, all the ways that we might imagine the world is being run--politics, religion, economics--are distractions, cover-ups, window dressing.  The only real power is the monetary system which remains hidden behind the activities of governments, religions, and all movement of goods and services.  If you ask why the USA is constantly at war with someone or something, the Zeitgeist answer is that nothing feeds the monetary system better, profiting and empowering those closest to the system, than warfare. Even conservatives acknowledge that money is the life-blood of the economic system, and nothing pumps more spending, borrowing and debt (i.e., money) into the system than a war. 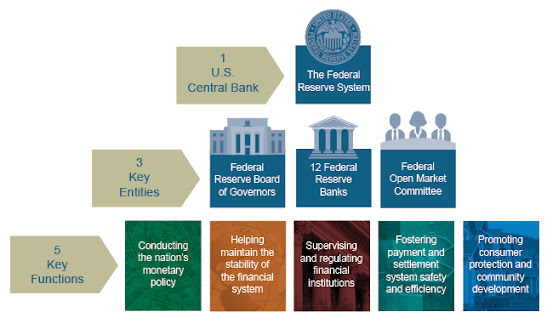 Who owns the Federal Reserve?

This may seem like a strange, dumb, childlike question, but as I have attempted to get a handle on how the system works, I understand perfectly how we end up at this question.  The pervasive suspicion that the Fed is owned and run by self-serving financial titans is hard to dismiss.  In her book Plutocrats, Chrystia Freeland notes a study on the incomes of Harvard University graduates showing a "split between bankers and everyone else, with financiers earning 195 percent more than their classmates." Harvard grads aspiring to become part of the 1% of the 1% have figured out that being connected to the monetary system is the way to do it. Certainly Jamie Dimon, a card-carrying member of the .1%, CEO of Morgan Chase, the largest bank in the USA, being a member of the board of the New York Federal Reserve has got to have the average wage-earner wondering "what the fuck! how is that possible?"

The official answer is that the Federal Reserve is “a blend of public and private characteristics.” Historically the network of "reserve banks" was created in 1910 at a meeting of private bankers on Jekyll Island (yes, it's a real place; I played golf there once in the 60s).  The idea that the entire monetary system would be run by unsupervised private bankers was unacceptable to Democrats; consequently, it was eventually agreed that the Chair of the Federal Reserve and the seven members of the Board would be chosen by the President of the USA and ratified by Congress. They all inevitably have strong connections to the world of banking and finance. As you work your way through the layers of administration, through the lip service and platitudes, the Federal Reserve does seem to be more and more a system run by banks for banks—despite repeated claims that the objective of the system is “to promote the effective operation of the U.S. economy and, more generally, the public interest.”

Whatever answer you accept, it seems clear that the much mocked concept of "trickle-down economics" is beside the point. We live, without much question, in a trickle-down monetary system.