Showing posts with the label atheism
Show All

The "We" Vote in Quebec 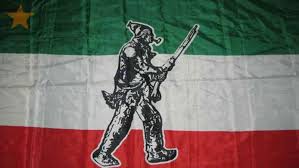 Les Patriots  Today is la  Journée nationale des patriotes   in Québec .   (Prior to 2003 it was  Dollard des Ormeaux  Day in celebration of the garrison commander who died fighting the Iroquois [Haudenosaunee]  at the Battle of Long Sault in 1660. Times change.)  In the ROC (the Rest of Canada) today is  Victoria Day  (in honour of Queen Victoria). In popular lore,  les patriots  are remembered as French peasants battling their English overloads.  This version of history is at least partially true; however, some leaders of the rebellion in Lower Canada (today Quebec) were English (notably  Wolfred Nelson  and his brother,  Dr. Robert Nelson ), some  members of the upper class--opposing  les patriots -- were French Canadian seigneurs , and, at the same time (1839), a similar rebellion of English-speaking farmers was taking place against the ruling-elite  Family Compact  in Upper Canada for the same reasons--demanding representational government. In Quebec, history is o
Post a comment
Read more
More posts