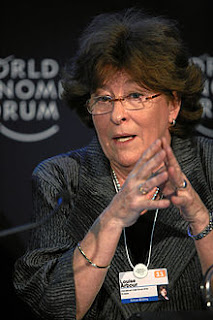 There is no "judicial independence" in Canadian extradition law.  Louise Arbour,  former UN High Commissioner for Human Rights, justice of the Supreme Court of Canada and Chief Prosecutor of the International Criminal Tribunals, has been trying to educate the Canadian public on this basic fact in Canadian law. The Canadian Extradition Act is available online and is clear (and I encourage you to click the hyperlink), in Canada, extradition is, ultimately, the responsibility of the executive branch of government (meaning the politicians we elect) not the judiciary.  Despite the obvious letter of the law, Prime Minister Justin Trudeau continues to stubbornly repeat the fallacy that "judicial independence" must be maintained in the Meng extradition trial. His use of the phrase "judicial independence" is proof that he has never looked at the Canadian Extradition Act.  Imagine: in a matter of minutes, anyone with an internet connection and basic reading skills can know more about Canadian extradition law than the Prime Minister of Canada.  Be one of those people.

I urge you to click on the link:  The Canadian Extradition Act.


The Definition of absurd

The definition of absurd is "wildly irrational, illogical and inappropriate."  I bother to define "absurd" because the word can sometimes imply ridiculous, mocking, even comic.  But in this case, the issues are deadly serious, especially for Michael Korvik and Michael Spivak who could spend years in a Chinese prison  (Canadian extradition cases have been known to take ten years) while the Canadian government dithers and does nothing.


The Most basic rule of logic

The most basic rule of logic is that if your premise is wrong, whatever conclusions or arguments follow from the premise will also be wrong.  For over 18 months, Canada's political leadership and virtually the entirety of its fourth estate have adopted a false premise summed up in the expression "judicial independence."  By adopting this false premise, Canadian politicians, the media, and numerous public figures have unleashed a litany of absurdities, non-sequiturs, and obfuscations which can only lead to delays and damage to Canada and Canadians.  Consider some of the claims you have, no doubt, already heard.


We are abiding by Canadian law


We had no choice: Canada is respecting its extradition treaty obligations

How many times have you heard these claims?  The word "obligations" is more than misleading; it is simply wrong.  Extradition treaties do not create the obligation for Canada to arrest anyone, and the Treaty on Extradition Between the Government of Canada and the Government of the United States of America is no exception.  The treaty lays out the circumstances and a list of the 30 crimes for which Canada will consider the American "request" that a person be extradited.  You can do a word search of the Treaty (click edit/find in your browser, then type in the word oblige and any of its cognates). The word "oblige" or its cognates does not appear a single time in the Treaty.  The word "request" and its various forms appear . . . a lot.  (I stopped counting after I had found the word used 50 times.)  The Public Prosecutor Service of Canada is explicit that "Extradition treaties do not themselves create an obligation or a power to arrest in Canada."  Still, Canadian politicians throw up their hands saying "we had no choice" and Canadian journalists piously repeat the falsehood.

Trump made it political

Invoking the name "Donald Trump" has become a means of announcing that the universe is absurd and, to quote Becket's Waiting for Godot, "there is nothing to be done."  Blaming Trump means no-one feels responsible to do anything.  Of course, Trump's public announcement that he would use Meng as a bargaining chip with China was immediate grounds for dismissal of the extradition request.  But, guess what, only the Minister of Justice can take that step.

One school of thought is that arresting Meng on December 1, 2018, the same day Trump was having a one-on-one meeting with China's President Xi was a deliberate attempt to undermine the American President orchestrated by his national security advisor John Bolton.  (If you click on this link to the Guardian article from 6 Dec 2018, you will see Bolton quoted as saying he didn't know if Trump had been informed of the Meng arrest.  My guess:  if his national security advisor didn't tell him, Trump probably didn't know.  Also, in the article, Bolton makes it clear that Meng was arrested because of NSA concerns about Huawei, not because she had committed bank fraud.)


Justice Minister David Lametti says foreign affairs will be a factor if and when it comes time for him to make what he acknowledges is a political decision whether to extradite Huawei executive Meng Wanzhou [ . . .].

I haven't heard anything from the Minister of Justice since.  Have you?


Canada is being bullied; we need to get tough with China

If you are wondering by whom Canada is being bullied, you need look no further than Adrienne Arsenault's interview with former National Security Advisor John Bolton.

When asked  about what the USA was doing about the imprisonment of Canadians Kovrig and Spavor, John Bolton replied:  "it has been spoken about publicly in the administration."  This is how the USA is getting tough with China.

Canada is being played by the USA and being left to its own devices to deal with China.  Bolton's response to Canada's dilemma:  "If you want to leave NATO, if you want to get rid of our protection militarily, please go ahead and do it.  If that's what you want.  Canada is free to do it."

When Arsenault asked, "How does Canada get its Canadians home from China at this point?"

Bolton's response:  "Look, I think we all want to get them home as soon as possible.  America has had its share of hostages around the world. If you don't like it, Ma'am, you're free to go ally with China.  If you think that's what your country wants to do.  Think about that long and hard."

Having ignored the letter of Canadian law for 18 months, we now find ourselves facing the absurd argument that we cannot release Meng because the Chinese have imprisoned two Canadians and acquiescence would encourage future hostage diplomacy.  Does anyone really believe that Canada is in a position to give China lessons on international diplomacy?  That anything Canada does will change Chinese behaviour on the international stage?

Arresting two Canadians in China, as I pointed out in December, 2018, has made the optics of releasing Meng more difficult for Canada.  At the time, the common observation was that the arrests of Kovrig and Spavor were for local consumption in China; that is, the government had to show that they were doing something about the arrest of Meng.  The need for two governments to save face with their constituencies has created this absurd standoff.  Neither government has solid legal grounds for their actions but before any change can take place, one of these governments has to admit the fact.

The UBC survey done last October concluded that 39% of Canadians felt arresting Meng was a mistake and 35% feel she should be released before the judicial process has concluded.  More recently:


the latest study from the non-profit Angus Reid Institute finds Canadians supportive of the federal government’s position of letting Meng’s extradition case play out in the courts. Seven-in-ten (72%) feel this way, while a minority (28%) say that they would rather the government negotiate a way to exchange Meng for Canadians Kovrig and Spavor.


What does this latest poll prove?  To fully answer the question, you have to look at the question that Angus Reid asked, and the answers that respondents were allowed to give.  This is what you get: 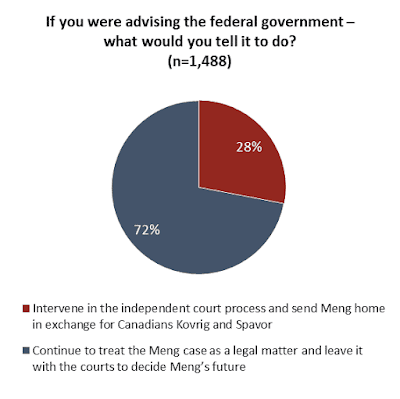 In other words, if you are forced to accept the false premise that extradition in Canada is an "independent court process" do you follow the law, or break the law and do something else? So yes, Canadians think of themselves as law-abiding, which is easy to do if you ignore the law . . . the Canadian Extradition Act.

There is only one way, that I can see, to escape the perfidy and absurdity.  A lot of Canadians will have to browse the Canadian Extradition Act. Is there any way that is ever going to happen?  Not likely.  Then again, what if you did?  And suggested the same to a few of your friends?