This is a bit of a sidebar but I am shocked by how frequently writers will misquote or misinterpret the sources of their own opinions and arguments.  Big deal, right?  Everybody is screaming about misinformation these days.  Over the years, I've formed the impression that the people who are supposed to be the most reliable sources of information, the people most likely to scream "misinformation," often prove the worst purveyors of misinformation.

If you have read Carl Sagan's rules for how to detect baloney, you are aware that what is quantifiable is more likely to be credible, factual and true.  In other words, if there is a number attached we can and probably should believe it--whatever "it" is.  The problem is that numbers always have to be interpreted.  With the interpretation, the baloney factor can immediately creep back in.

If you have ever been to summer camp, chances are you have played the "telephone game."  The point of the game is to discover how information gets distorted as it is passed (whispered) from one person to another.  Contrary to the argument that the internet would democratize the news, if you google any recent news story you will find all the major news agencies and most of the minor ones covering exactly the same story.  Each media outlet will provide a headline putting a slightly different spin on the news, and the headline that best plays to its target audience, and is most exaggerated, outrageous and enraging will get the most readers.  The old standard used to be that a news story needed at least two authentic sources, but these days you can read the same story in a dozen different places and conclude it must therefore be true, when the media may well be--a la telephone game--just repeating each other with increasingly colourful headlines based on a single questionable or misinterpreted source.  This brings us to the single most frequently misinterpreted and questionable source:  the poll.

The Template for a prelude to war

Following the model established when the US sent VP Joe Biden to Ukraine in 2014 to get the Ukrainians stoked for a war with Russia; recently, the Democrats sent their geriatric warrior princess, Nancy Pelosi, to see what could be done about encouraging a war between Taiwan and China.  (To be fair about the purpose of the visits, in both cases their children were involved.  Nancy's son accompanied her to do some business in the region, and Joe's son was in Ukraine in 2014 on the payroll of a Ukrainian energy company.)  VP Biden's promise, in 2014, of military support for Ukraine was ambiguous.  This time, President Biden has explicitly promised Taiwan the military backing of the USA, but the State Department has been vigorously walking back his statements.  And, of course, Canada, ever eager to imitate big brother USA, followed up by sending five MPs to Taiwan to further irritate China.  Needless to say, Taiwan is in the news because everyone in the West wants to know if, like the Ukrainians, the Taiwanese are ready to go to war with the tyrant next door.

According to the Globe and Mail

The headline in the Globe and Mail (1 October 2022) is radically moderate, outside the mainstream:  "Small minority in Taiwan say they support unification with China."  These days it's pretty radical for anyone in western media to report that even a "small minority" supports China. The article is a series of interviews with Taiwan citizens who are part of this fringe who claim "We are Chinese [ . . .] we should unite [. . .]."  However, just so we Globe readers don't get the wrong idea there is this:

An August poll by the Taiwanese Public Opinion Foundation, an independent and non-partisan organization, found that only 11.8 per cent of respondents favoured "unification" with China.  Fifty per cent of those surveyed said they would opt for independence, and 25.7 backed the status quo.

This paragraph serves as an inoculation against the content which follows, just in case you might be tempted to take the pro-unification opinions as a representation of reality.  This is the truth:  here are the numbers supplied by an "independent," "non-partisan," "Taiwanese" foundation.  What more could we possibly ask for?

Who Did the survey?  Who supplied the numbers?

Ever the skeptic, I googled "Taiwanese Public Opinion Foundation."  Hmm, that's odd.  It's home office is in Washington, DC.  When I googled a bit deeper I discovered its parent organization, the Global Taiwan Institute.  Most of the heavy-weights on its Board of Directors and Staff have ties to the US Defense and/or State Department.  The Board of Directors describes itself online as Taiwanese-Americans and "board members all share a passion for closer ties between the United States and Taiwan." What does "independent" mean?  "Non-partisan"?  What does "Taiwanese" mean?

Still, none of this proves that the survey wasn't carried out with scientific rigour and impartiality.  Numbers don't lie.  However, before there can be numbers there must be questions.  Of course, the poll doesn't ask the question we all want an answer to:  Are the people of Taiwan ready to go to war with China to claim independence?  If ever there is a war, we know this poll will be used as proof that the war is happening because it is the will of the Taiwanese people, who are ready to bravely fight and die for their sovereignty and independence from an evil Chinese empire.

What Was the question?

Here is the question asked in the poll:

The wording of the question will always affect the outcome of a survey.  I would question the use of "the other side" as opposed to the official designation,  "Peoples Republic of China"  or even the vernacular "mainland China."  Nonetheless, here are the results of the survey of just over a thousand respondents, in July 2022, which are being repeated in the Globe and Mail. 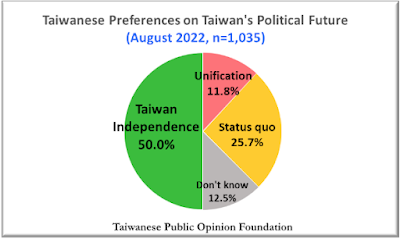 The Interpretation of the numbers

These are the number which will eventually be used in western media to justify a war between Taiwan and China. However, before we send the people of Taiwan into battle for their independence, we should note that 50% of respondents did not express a desire for independence.  Moreover, based on a relatively small sample (1,035 people), the margin of error is 3.5%.  The survey, as a whole, danced around the question of a war with China--reactions to war games, Pelosi's visit, Biden's promises, confidence in Taiwan's military, etc--but never asked the obvious question: Are you ready to go to war with China over Taiwan's independence?

The only direct "war question" in the survey was "Do you think war with China is imminent?" and 39% of respondents thought war was likely, 53% thought it was not and the rest didn't answer. Obviously, many of the people who said they wanted independence weren't thinking about going to war for it.

The same survey question about Taiwan independence has repeatedly been asked on surveys since 1994.  In many respects the 50% for independence number is an aberration, the highest that has ever been recorded.  One year earlier, the Taiwanese Public Opinion Foundation results for the same question claimed 46.6% in favour of independence.  Nonetheless, according to the Taiwanese Public Opinion Foundation report:

This is yet another data point to support our long-established observation that the majority of the Taiwanese public, when offered the options, prefer Taiwan independence above all other options including “status quo”. The narrative that “a majority of Taiwanese want to maintain status quo” is simply a myth that is unfortunately embraced by the current leadership of both major political parties (DPP and KMT) which is not supported by polling data.

This conclusion eerily echoes the "will of the people" argument which was used to justify the overthrow of the democratically-elected government of Ukraine in 2014.  While the report claims that the survey showed a preference for "Taiwan independence above all other options including "status quo'," we should note that the question asked was a binary--independence or unification--and did not offer "status quo" or any other possibility as an acceptable answer.  In other words, those who answered "status quo" had to ignore and go outside the question to answer.  Given that Taiwan is an island and has been politically dissociated from mainland China since 1949, it is surprising how few Taiwanese chose independence to answer a survey question phrased as it was.

What I have been quoting is an English excerpt based on the full survey. The excerpt  claims: "The full release in Chinese language is available on our official website."  Even with the help of Google translate, I was unable to track down the "full release." However, in the course of my attempts, I did discover that the address of the Taiwanese Public Opinion Foundation was said to be "2F, No. 170, Fuxing North Road, Zhongshan District, Taipei City" (not Washington, DC).  All the information I read on the website destined for a Taiwanese audience was scrubbed of reference to the USA.

Eventually I found another Taiwanese survey on the same question, and this time (as far as I could determine) the organization does seem to be Taiwanese, in Taiwan and under the umbrella of a Taiwanese university: Election Study Center, National Chengehi University.  Unfortunately, access to their data requires a special permission which I do not have.  But I was able to copy this chart (click on the link if you can't read what I copied): 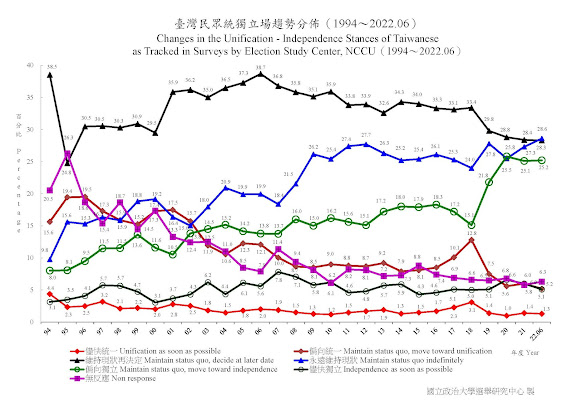 As this graph shows, there are seven possible answers to the "Unification-Independence" question, and the Election Study Center has asked the question every year since 1994.  From 1994 to June of 2022, "Independence as soon as possible" has consistently scored second lowest of the seven possibilities.  Only "Unification as soon as possible" consistently scored lower.  For eighteen years, the Taiwanese have consistently demonstrated that they do not want to be pushed into independence or into unification with China, and they have elected governments which reflect those wishes.  Perhaps this is what should be reported in western media before we find ourselves with another proxy war.