Showing posts with the label Saint Mathew
Show All 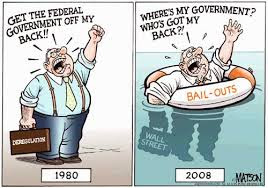 Shock and awe and bank deregulation Amid the boom and flash of the spectacular political theatre going on right now, you may not have noticed the announcements in a single utterance on television or in columns in the back pages of your local newspaper—“banks need to start lending money again,” (Trump on CNN), “President Donald Trump promised a meeting of community bankers to strip away some Dodd-Frank financial regulations” (B3 Globe and Mail 10 March 2017) and White House fires Preet Bharara “the high-profile Manhattan prosecutor known for his pursuit of public corruption and Wall Street crime” (A18 Globe and Mail 11 March 2017)—bank deregulation is back! “Bank deregulation” was the precursor to the financial collapse of 2008 causing banks and financial institutions to go bankrupt, individuals to lose homes, jobs and pensions, and triggering the government bailouts of the banks costing taxpayers what is now estimated to be a trillion dollars.  (Historically the British and American
Post a comment
Read more
More posts