What Is Literature about?

Can literature be about life?

When I was teaching a course on American Literature, one of my students, a woman in her twenties, was a mother of five children. I would occasionally see her and her husband with the kids in the park where my son played soccer. One evening her husband was alone with the kids and approached my son and me as we were tossing a Frisbee. He emanated an intensity that I associated with being the young father of five. Nodding hello, he said, "My wife is in your American literature course." Honestly, I assumed I was in trouble and braced myself. "At night we sit at the kitchen table," he said, "and my wife tells me about your course." Then he told me, "I thought a literature course would be just about books, but yours is about life." He went on to express his regret that he couldn't take the course.

The Rules of postmodernism

It was a supreme compliment, and I cherish it to this day. But, at the time, I remember thinking, "I hope he doesn't spread the rumour that I teach literature as being about life." In those postmodern days of structuralism and post-structuralism, any academic who wanted to be taken seriously in literary studies had to acknowledge that literature representing reality was a naive notion which had gone out of fashion a hundred years earlier.

"Realism" or "mimesis," as it is sometimes described, was the attractive idea that literature could imitate or represent reality, and thereby become a kind of laboratory for the scientific investigation of human behaviour. It spawned "social realism," the literary representations of the struggles of the working class, which devolved into "socialist realism," a state-controlled instrument of Soviet propaganda.

Modernism and postmodernism were the antitheses of realism and mimesis. Modernist movements like impressionism, expressionism, symbolism, and surrealism rejected the notion of art representing reality with variations on art creating reality. Postmodernism piled on the rejection of realism by emphasizing that even art wasn't really real. So, for example, if you read the novel The Handmaid's Tale through to the end, you would discover that the diary you have been reading which you thought was written by the Handmaid was, in fact, transcribed from audio tapes by a historian named Wade, who questions that the Handmaid ever existed. He came up with the title as a sexist pun and homage to Chaucer's Canterbury Tales.


"Literature is about other literature." 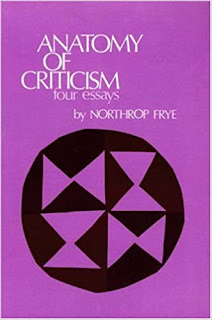 "Literature," according to Northrop Frye, Canada's most renowned literary theorist, "is about other literature." Frye developed his own brand of structuralism called "mythopoeic criticism," which proposed that the total body of literature could be studied in terms of shared or "archetypal" symbols that emerged from mythology and continued to be used and reused throughout the history of literature. Frye disparagingly described Canadian literature as suffering from a "garrison mentality"--a widely misunderstood expression. For Frye, writing which remained too close to local, everyday, lived or social reality remained trapped in the garrison, failing to venture out into the wide world of literature where all great literature was produced. (If Frye were a millennial, he would have no doubt been an avid video gamer.) Yes, I was flattered that my course wasn't "just about books" but I recognized that it was supposed to be.

I was able to negotiate the contradiction between what I taught and what I was supposed to be teaching by cannibalizing the concept of "intertextuality." "Intertextuality" can be a very complex concept, especially as it is defined by Julia Kristeva, the psychotherapist credited with coining the term. I preferred Graham Allen's more accessible description of "intertextuality" from the early pages of his book Intertextuality:

The idea that when we read a work of literature we are seeking to find a meaning which lies inside that work seems completely commonsensical. Literary texts possess meaning; readers extract that meaning from them. We call the process of extracting meaning from texts reading or interpretation. Despite their apparent obviousness, such ideas have been radically challenged in contemporary literary and cultural theory. Works of literature, after all, are built from systems, codes and traditions established by previous works of literature. The systems, codes and traditions of other art forms and of culture in general are also crucial to the meaning of a work of literature. Texts, whether they be literary or non-literary, are viewed by modern theorists as lacking in any kind of independent meaning. They are what theorists now call intertextual. The act of reading, theorists claim, plunges us into a network of textual relations. To interpret a text, to discover its meaning or meanings, is to trace those relations. Reading thus becomes a process of moving between texts. Meaning becomes something which exists between a text and all other texts to which it refers and relates, moving out from the independent text into a network of textual relations. The text becomes the intertext.

Everything is/can be text

The next step in the move from literature to life is to recognize that anything can be called a "text."  You, me, your life or mine, or if you prefer, your life story or mine is a "text." The meaning of any literary text emerges from the connections which a reader makes between the literary text and any other texts which the reader might think relevant, including the reader's life experience as one of those texts.

Ultimately, the literature I taught was "about life," and I encouraged my students to read it that way.