A Charter of Values?

In 2013, when the Parti Québécois government was proposing a “Charte des valeurs”  I reacted, on this blog, with "outrage, shame, embarrassment, anger, frustration, fear."  Admittedly, by the time the  Coalition Avenir Québec introduced its  "Bill 21: An Act respecting the laicity of the State," a watered-down version of similar legislation, my reactions had mellowed.  (See The "We" Vote in Quebec.) Nonetheless, I remain distinctly uncomfortable whenever I hear a politician invoking "values" and, still worse, "our shared values."  We might expect the expression "our shared values" to be followed by a list of said values but it almost never is.  Upon hearing "our shared values," the white supremacist and the advocate of Black Lives Matter might both breathe a sigh of relief thinking "finally, one of us"--which explains politicians' love of this empty expression.

The Common Objects of a People's Love

In his inauguration speech, Joe Biden offered this list: "Opportunity. Security. Liberty. Dignity. Respect. Honor. And, yes, the truth."  But he didn't call them values.  Citing Saint Augustine, he referred to them as "the common objects" which define a multitude as a people, and this particular list as what defines Americans.  However, as some critics have pointed out, what Augustine was suggesting wasn't necessarily values or virtues.

“If one should say, 'a people is the association of a multitude of rational beings united by a common agreement on the objects of their love,’ then it follows that to observe the character of a people we must examine the objects of its love.” — St. Augustine, City of God 19.24

The objects of a people's love could equally well be venal, could be vices.  The USA may be the "land of opportunity," whose "military-industrial complex" ensures its security, and whose constitution guarantees its citizens the liberty to have guns but not necessarily abortions or to use the girls' washroom if your birth certificate says you're a boy, but I've never thought of dignity, respect, honor (except for the spelling) and truth as being distinctly American.

The more I have reflected on this topic, the less certain I've felt about what counts as a value.  In the Judeo-Christian tradition, the vices or "deadly sins" are clear:  pride, greed, wrath, envy, lust, gluttony and sloth.  The "heavenly virtues"--prudence, justice, temperance, courage, faith, hope, and charity--are more ambiguous. We might like to imagine that virtues and vices are absolutes, but it seems obvious that the difference between them is one of degree.  Moderate degrees of the vices seem desirable, while exaggerations of the virtues are equally undesirable.

Invariably, we imagine our values are virtues and, conversely, we are likely to imagine that other people's values seem like vices.  In truth, few of us ever have to discover what our values truly are or if we have any.  The word "values" shares its underlying root with "valour"; that is, not just worth but strength and courage.  Our values are the principles that we have the strength and courage to maintain under stress and to act upon.  Still, even the most valourous among us can find themselves in a conflict of values, a no-win, double-bind situation which is the defining characteristic of tragedy.  (See The Double-bind Theory of Tragedy and Madness.)

Obedience to Authority:  Virtue or Vice?

Anomie, the absence of values, has long been the claimed condition of privileged, modern societies.  I am mindful of social psychologist Stanley Milgram's infamous Yale "Obedience to Authority" experiments which revealed that 65% of the test subjects would torture a victim to death using electric shock simply because someone who appeared to be in authority told them to.  Obedience is, of course, the most taught and enforced value in education.

What Are Your Values?

The webpage What Are Your Values? provides a list of 150 potential values, including obedience.  Looking at this list and every other list I have considered, I come away wondering:  are these really values?  The webpage offers a soft definition of values as "the things you believe are important." Sex and money don't make anyone's list of values, but I've met a few people who seem to think they are important. 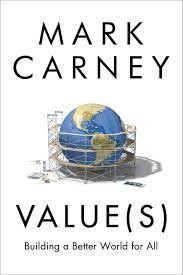 The Central Bank:  God or the Devil?

I was drawn to Mark Carney's Value(s), in the first place, because of the title and because he was Governor of the Bank of Canada and Governor of the Bank of England.  To conspiracy theorists like my friend Henry Makow and members of the Zeitgeist Movement (not to mention bitcoin fans and fanatics), central banks are the spawns of Satan.  Against this foil, it was striking to read Carney's passionate prescriptions and earnest defense of central banks and a "sound dollar."  His sententious, Polyanna proposals for a better world are occasionally ponderous and left me wondering: would fat cats on Wall Street and in the Federal Reserve give two seconds of consideration to what he is recommending?

In Values, Carney comes across as a nice guy determined to be nice to everyone, even  Jamie Dimon, CEO of JP Morgan Chase and a member of the New York Federal Reserve Board.  However, in Plutocrats, Chrystia Freeland reports on the animosity between Carney and Dimon which exploded at a meeting of the IMF and the World Bank in Washington in 2011.  Freeland points out:

The battle between Carney and Dimon gets at a bigger and more contentious issue [than taxes and profits]:  Are the interests of the state and its big businesses synonymous?  If not, who decides? And if they do clash, does the state have the right--and the might--to curb specific businesses for the collective good?

As Freeland records, Dimon widely promulgated his position that the kinds of global banking regulations Carney was proposing were "anti-American." The Carney speeches Freeland quotes show that the genesis of Value(s):  Building a Better World for All is at least a decade old.  Carney himself traces its origins to his childhood in Canada.

Values and value are related but distinct. In the most general terms, values represent the principles or standards of behaviour; they are judgements of what is important in life. Examples include integrity, fairness, kindness, excellence, sustainability, passion and reason. Value is the regard that something is held to deserve – the importance, worth or usefulness of something. Both value and values are judgements. And therein lies the rub.

"Therein lies the rub" indeed.  Can we separate values and value, the dancer and the dance?  Or, on the other hand, are they in complete contradiction to one another?  Witness the paradox of The Antiques Roadshow.  An expert explains the values embued in an artifact, but the climax of every episode is the revelation of the dollar value of the object, which is based on the current market and only a tertiary result of beauty or craftsmanship, history or sentiment.

Carney claims that the value of "fiat money is grounded in the values of trust, integrity and transparency." The US greenback, the fiat (non-gold/commodity-based) money that really counts because it is the "global reserve currency" and about which Carney has remarkably little to say, as we have seen, is backed by the threat of military intervention.  (See Petrodollar Warfare.)  Moreover, in recent years, as Kishore Mahbubani (Has China Won?) decries and Josh Rogin  (Chaos under Heaven) lauds, the US has been weaponizing the dollar. (See Analysing the Discourse on the USA-China Cold War.)  The US Federal Reserve was born in secrecy and, to this day, most people don't realize, as Carney confirms, that 80% of the money in the world is created by private banks.  (See The Truth About Money.)

How Many "values" are there?

Carney's orbit of values expands centrifugally to include, in his final chapters: "solidarity – fairness – responsibility – resilience – sustainability – dynamism, and – humility." Once again, I find myself questioning which, if any, of these stand as values.  Values are the principles we are prepared to uphold in the most challenging of times.  Logically, values spring from ethics.  The word "ethics" comes from "ethos," behaviour over time, often translated as "character," and contrasts with "pathos," the emotions of the moment.  In the end, I conclude "values" is a misnomer.  There is only one value: justice.  Those things we call "values" are details:  customs, habits, rituals, and allegories.  Justice must be based on ethics, and Kant's much-maligned "categorical imperative"--laws are moral if you accept them being applied to you--imperfect as it is, is as good an option as we have available to us.