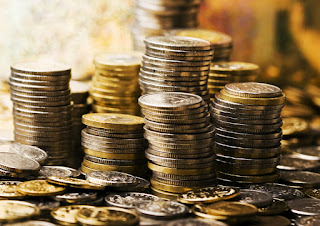 The entire process seems like a game of "let's pretend."  "Let's pretend" you are a bank and I borrow some money from you, then I deposit the money I borrowed from you in your bank.  There is no limit to how much money I can borrow from you, and it doesn't matter if you think I'm a good, reliable client or not.  When I spend the money I have deposited in your bank, you take the money out of my account.  Of course, you will never be asked me to repay the money I've borrowed from your bank. Later, when I have depleted my account, I will just borrow some more money from you.  In more adult language:

What we are talking about here, in big words, is the ontology of money.  With most things that are borrowed, there is an assumption that they must exist in order to be borrowed--not so with money.  It's as if you go to the bank to borrow a cup of sugar, the bank has sugar, but the sugar they lend you doesn't exist--except that you still owe the bank a cup of sugar.  Guess what?  Now the bank is considered to have even more sugar, because the sugar you borrowed is added to the bank's supply. What "leverage," "the fractal banking system," and "capital constraints" all indicate is that the bank is allowed to lend you 10, 25 or even 40 times the amount of money it actually has, depending on the "limiting rules" in place.  For a period of time, the banks in Iceland had no limit on the amount they could lend out and thereby created so much money for themselves that they had more money on their books than the entire GDP of the country.  Imagine you were a bank and the "capital constraint" leverage ratio was 4% and you had a hundred dollars in your pocket.  You could lend your friend $2500 (without touching the $100 in your pocket).  Once you had your first friend's IOU for $2500, you could lend a second friend 25 X 2500 = $625,000.  If you could find a third friend, you could lend him $625,000 X 25!  You'd be a multimillionaire.  Kinda makes you want to be a banker, doesn't it?