Anything can be used as money:  paper, tokens, clay tablets, seashells, tree bark, pixels on a computer screen, strokes on a ledger somewhere, even people.  Historically, not just slaves and cumal were used as money.  The Bible tells us a man can beat his servant because "he is his money" (Exodus 21:20-22).  As Jacob Goldstein reiterates throughout Money:  The True Story of a Made-up Thing:    "money is money because we believe it’s money." 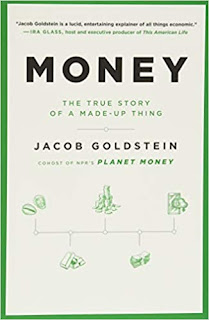 However, some things become like money (a soft way of saying they become money) even when people doubt, question or just don't notice.  Silver, data, Modigliani nudes, and, most importantly, "commercial paper" have all become forms of money despite doubts, questions and ignorance. 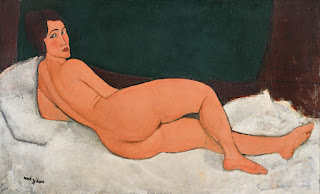 In 2008, the day after the Lehman bankruptcy, this Modigliani

sold for $150 million (USD). Someone was shifting

currency from the stock market to the art market.

Goldstein quotes Marco Polo who wrote that his readers would not believe this but  "the Great Kaan [of the Mongol empire] causeth the bark of trees, made into something like paper, to pass for money all over his country."  The result of the Kaan's "bark of trees" money was a unified, stable and prosperous empire.  When the Ming Dynasty attempted to return to traditional (money-less) ways in China, the result was three hundred years of poverty, deprivation and starvation.  Even today, world-wide, getting food from farmers' fields to the shelves of your local grocery store is facilitated by; in fact, dependent upon money.

In the context of the Covid-19 pandemic, one after another, representatives of the US Federal Reserve announced that they could provide a limitless supply of US dollars to support American businesses?  Of course, it's obvious that money is a product of our collective imaginations and is therefore infinite (or at least only limited by our collective imaginations), but it was unprecedented for the Fed to publicly confirm this fact.

Steve Pinker was quite right to point out the difference between wealth inequality and poverty in his tome Enlightenment Now.  What Pinker calls the "lump fallacy" is the mistaken notion that the economy is a "zero-sum" game:  "that if some people end up with more, others must have less."  On the contrary, if history shows, as Pinker claims it does, that we have all prospered over time--even if unequally--we have nothing to complain about.

Pinker's point is well taken, but I suspect that in this argument he might be confusing wealth and money, the real economy and the financial markets.   Money is infinite but the planet itself is finite, and its wealth/resources are similarly limited.  The real economy becomes very much a game of winners and losers when the biggest winners are willing to sacrifice the planet for short-term gain through, for example, global warming (which, as Pinker later argues, is the real and most threatening problem of our time).

What every kid should know about money

Perhaps I need to remind you, dear Reader, and myself that this blog is about education.  I really don't know what is being taught in grade schools and high schools these days, but shouldn't every middle-schooler know how money is created?

Goldstein concurs with every other source that I have consulted on the subject: "Most of the money in the world is not just stored in private banks; it is created by private banks."  I found it reassuring that Salman Khan, founder of the Khan Academy, has a very straightforward explanation, directed at high-school students, of how private banks create money.  Khan displays the mathematical formula which shows that for every $1000 which the Federal Reserve introduces into the monetary system, private banks, using the fractional reserve system, create $10,000.

The Federal Reserve was created at a "secret meeting"

According to the "History" section of the Federal Reserve website, the Fed began with a gathering which included a senator, his secretary, an economist and three private bankers who met in November, 1910, on Jekyll Island.  (The name sounds like something from a Gothic novel, but the place does exist.  I played golf there once and even slept in the famous Jekyll Island Clubhouse which was pretty run down by the time I stayed there.)  The secrecy of the meeting is emphasized in the "Federal Reserve History."  Senator Aldrich . . .

went to great lengths to keep the meeting secret, adopting the ruse of a duck hunting trip and instructing the men to come one at a time to a train terminal in New Jersey, where they could board his private train car. Once aboard, the men used only first names – Nelson, Harry, Frank, Paul, Piatt, and Arthur – to prevent the staff from learning their identities. For decades after, the group referred to themselves as the “First Name Club.”

Despite the fact that the  Federal Reserve is a model for monetary systems all over the world (including in Canada, Russia and China), and there are widely available descriptions of how the system works, more than 100 years later, the shadow of secrecy still seems to hover over how the system works and how private banks create money. Consequently, as I outline in How Is Money Created, for conspiracy theorists, the Fed is part of a cabal of satanist bankers out to control the world while, for others, it is an altruistic gathering of civil servants.  Officially and perhaps most accurately, it is a mix of the private and the public.  However, which is the dog and which the tail, and who wags whom remains a matter of debate.

For most of us, a bank is a bank.  (However, if you googled "types of banks," you might be in for a surprise.)   As Alan Blinder explains in After the Music Stopped,

[ . . ] commercial banks do have deposits--that's why we call them banks.  Investment banks do not.  They fund themselves almost entirely by borrowing. Remember, with a 40-to1 leverage, capital constitutes a mere 2.5 percent of assets.  They must borrow the other 97.5 percent.

In a 2015 post, I reported estimates of the unregulated derivatives market as being between 710 trillion and 1.2 quadrillion US dollars.  At the time,  I remember thinking these numbers were too big to be believed.  How could there be an unregulated market that was 50 times greater than the GDP (the total value) of the US economy?  According to Investopedia the current (2019) value of the derivatives market is estimated to be over a quadrillion dollars or 10 times the GDP of the entire world.

The mind boggles at the size of these numbers.  How are they possible?  What are the mechanics that allow such fantastically large amounts of money to be created? When I read that "financial institutions  . . . are heavily involved in various aspects of borrowing and lending,"  I interpret that they are creating money.   As Goldstein explains, the collapse of 2008 "is a story about money itself—a new kind of money that started flowing through a new kind of banking system that nobody quite knew was a banking system."  This new kind of money is "commercial paper."  It usually comes in denominations of $100,000  and is issued by commercial banks and investment banks on behalf of large companies seeking funding.

About having private banks create money, Goldman comments, "For nearly a hundred years, some of the smartest economists in every generation have said this is a horrible way to do money."  One solution, as Goldman describes, is "dazzlingly simple":

The root of the issue is that basic banks do these two, very different things. (1) They hold our money and make it easier for us to get paid and make payments. (2) They make loans. The dazzlingly simple argument from all of these great economists comes down to this: split those into separate businesses. Variations on this idea are usually called “100% reserve banking” or “full-reserve banking” (as opposed to the current, fractional-reserve banking system)  [. . . .]

Another solution now being debated and seriously considered, as Goldstein reports, is called "Modern Monetary Theory or MMT, for short."  The underlying principle is that the government should take over control of the creation and distribution of money to ensure full employment and sustainable development of available resources, reducing the money supply to prevent inflation when these objectives are met.  Oddly, much of what has been happening in the context of the 2020 pandemic, with governments distributing money directly to businesses and individuals, seems in line with Modern Monetary Theory.  We are in the process of discovering how the theory works in practice.

Whatever the future holds, it is inevitable, as Goldstein concludes:

that money will change. The way we do money will look as strange to our great-great-grandchildren as a world where banks print their own paper money with pictures of Santa Claus.

In response to this post, one of my readers (Thanks D!) email a link to this Front Burner podcast on Modern Monetary Theory:  Never Mind the Deficit!