Peter Zeihan's 2015 anatomy of world geopolitics, The Accidental Super Power, is fascinating reading largely because of his bold and confident predictions about the near future (2015 to 2030).  I felt both taken aback and vindicated to read his chapter entitled "Unlikely Canada."  I was taken aback to read that my country is unlikely to exist for much longer but vindicated that his rationale echoed an observation I made in a presentation entitled "The Concept Formerly Known as Nationalism" in 2002 at the University of Toronto. I pointed out:

At first glance, Canada doesn’t make sense as a country.  Everything about the country’s social and physical geography suggests that it should not exist.  We live in a country that is three thousand miles long, in which 90% of the population lives within a hundred miles of the American border; the vast territories to the north remain largely unknown to the majority of the population.   We are divided by language, race, ethnicity, gender, by sexual and political orientation, province, region and class.  The urban centres are growing, largely in isolation from one another, while every place else stagnates and shrinks.

My point, unlike Zeihan's predictions of disintegration, was that "Such a place can only be held together through conscious and considerable human effort."  If geography, demographics, economics, provincialism and short-term self interest are allowed to play out uncontested, then Canada's future, as Zeihan claims, is "unlikely."

As a citizen of Quebec, I witnessed the independence movement grow from a fringe terrorist group, the FLQ (Front de libération du Québec), in 1970 to the ruling Parti Québécois in 1976. Through two referendums on independence--1980 (40.44% for; 59.56% against) and 1995 (49.42% for; 50.58% against)--I came to realize how messy, unpredictable and even mercurial democracy and the future of nations can be.

Zeihan's take sounds a lot like the Quebec bashing I'm used to hearing from Anglo Canadians, especially when he describes the federal system of equalization payments as "bribing Quebec" to the tune of $16 billion a year using tax money from Alberta.

Indirectly, Zeihan makes a point I have unsuccessfully tried to present to my Québécois friends: Canada wouldn't necessarily survive provincial independence. As a Québécois comedian quipped during an early referendum campaign, "According to advocates of independence, Quebec will still have Canadian passports, Canadian money, and the Canadian military. Gee, maybe we're already independent and don't know it!"

The underlying motivation for Quebec's independence tends to be maintenance of the language, culture and identity; in other words, all the features of ethnic homogeneity while at the same time adamantly denying ethnic nationalism.  The rational justification for independence is that a sovereign Quebec would be a better country than Canada.  I have argued that you can't have a sovereign Quebec and a strong, thriving  Canada; you can't have your Canadian cake and eat it too.  Most Quebec independentists refuse to acknowledge this claim, perhaps because there isn't an exact translation of this expression (French equivalent is, roughly,  "you can't have the money and the butter"), but more likely because French language and culture would arguably fare less well without a Canada, in an expanded USA or as one of a number of Balkanized countries on the US northern border.

Having outlined in detail how Quebec secession would be the end of Canada, Zeihan then concludes categorically that "the Quebec question is answered. Quebec will not secede and so the question won’t kill Canada." While Zeihan's certainty might reassure some Canadians, we should not lose track of the fact that three of the four parties in Quebec's National Assembly are officially in favour of independence.  In the most recent Quebec election (3 October 2022) the CAQ (Coalition Avenir Québec), led by Bernard Legault, a former PQ (Parti Québécois)  minister, won a commanding majority.  Legault is rightly described as an étapist, adhering to a step-by-step strategy to Quebec sovereignty. His current dominance might well prove a step in that direction.

The Liberal Party of Quebec, the only federalist party to hold seats, barely managed to form the official opposition by winning seats in and around Montreal and western Quebec.  But the Liberals won less of the popular vote than the independence-minded parties which placed third and fourth on October 3rd.

I have, in moments of gallows humour, predicted that if Quebec were to leave Canada, it would not be the first province to do so.  It would be third behind Alberta and British Columbia.  Zeihan is humourlessly adamant that Alberta's future is neither to remain part of Canada nor to become sovereign.  Alberta's manifest destiny is to join the USA. 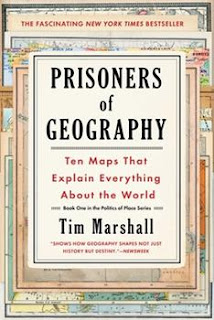 With an unencumbered market for its oil and grain, and an influx of young, highly-skilled American labour, Alberta, according to Zeihan, "as a U.S. state would not simply be rich—the richest in the Union, in fact—but would have a vibrantly well-financed and diverse economy that would put its former (and a lot of its newfound) countrymen to shame."  Zeihan's evidence for Albert's immanent secession was the election of the Wildrose Party as the official opposition in 2012.  The Wildrose Party has since disintegrated but, in recent days, the former leader of the party, Danielle Smith, was elected to lead the United Conservative Party and became de facto Premier of Alberta.  Smith has promised a  sovereign Alberta inside a strong and thriving Canada.  We now have étapist Premiers in both Quebec and Alberta.

What Keeps a country together?

Both Zeihan and Tim Marshall display how countries are arbitrary--accidents of history, lines on a map.  Sometimes countries hold together because of geography (mountains, deserts, rivers and coastlines) or economics or religion or ethnicity or military might or a common enemy.  None of these hold Canada together; in fact, they tend to divide us.  I often think of Canada as a poker player who picks up his hand and sees four aces but is reluctant to bet because the guy across the table is smiling like he might have a royal flush.  Canada has everything, now and for the future.  Canada is a really good idea but I am frequently amazed at how difficult it is to sell this idea to Canadians.

The Concept formerly known as nationalism

In my presentation to the Association for Canadian Theatre Research, somewhat tongue-in-cheek for an academic plenary, I said:

I grew up being told that this country was held together by a railway.  The railway was sold because the truth was that in an age of communications the country was really tied together through its public broadcasting system.  As soon as this notion had installed itself, the budgets of the CBC were massively slashed.  Most recently the truism has become that Canada is held together by its distinctive network of social programmes: no sooner said than those programmes are under attack at every level of government in the country.  On the basis of recent history, I am not about to propose that the theatre is or should be a means of holding the country together.

We need to take a chance and build a unified and independent Canada. And if we are not willing to do that then, at least, let's have an open discussion about why not.