Alerted by my guru, I read the big news in the financial markets last week that  GameStop shares are up 1000%.  In Canada, GameStop owns the EB stores which sell video games and accessories.  When some big hedge funds were shorting GameStop stock, a social-media network of smaller investors, described as "gamers and nerds," decided to squeeze the short-sellers--which they did with great success, raising the stock price and costing the hedge funds billions in losses.

Andrew Left of the hedge-fund Citron, one of the short-sellers, remained adamant that "Nothing has changed with GameStop except the stock price," and the company is still a loser.  (I always have time for sour grapes.) This week the headline is "GameStop Stock Drops 81%." So, how much is 1000% - 81%?  Spoiler alert: that's not how percentages work. How many of us innumerates have a confident understanding of this basic fact of mathematics?

One of my golf buddies regularly lectures to nursing students and described to me this shtick that he uses in his classes.  Standing at his lectern he asks the class, "How many of you would pay me a dollar for a trick which I guarantee will increase your chances of winning the lottery by 100%?"   He moves around the room and collects his payments among the raised hands, returning to the lectern, he tells them "buy two tickets."  (He assures me that his profits are redistributed to the class at coffee break.) His point is that it is primordial for medical specialists to understand or, more to the point, not be fooled by percentages.  An increase of 100% is X2; of 1000% is X10. 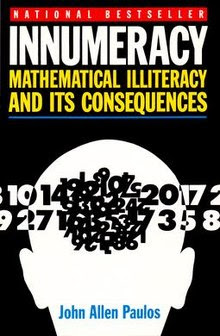 The First rule of percentages!

In Innumeracy, John Allen Paulos gives the example of a "new toothpaste which reduces cavities by 200 percent"  and muses on what this claim could possibly mean.  A clothing store that announces a 100% sale would presumably be giving everything away for nothing.  A 200% reduction would mean the store would be paying us.  Advertisements using percentages are generally meaningless.  The rule, the obvious question to ask, as Paulos points out, is:  "Percentage of what?"

A Case in point

When shopping for a new car in 2019, I took note of the ubiquitous ads from various car dealerships offering 10%, 20%, even 30% off MSRP.  Should I be ashamed to admit that I couldn't remember (if I ever knew) what "MSRP" stood for?  It means, as you, no doubt, already know, "Manufacturer's Suggested Retail Price."  What the manufacturer "suggests" is not what the dealership charges for the particular model you want to buy. But it gets worse.  You (and I) might think you got a deal because you negotiated 20% off the MSRP, but according to Car and Driver, the MSRP is smoke and mirrors. The real price upon which you should begin negotiations is the invoice price; that is, the lower-than-MSRP amount that the dealership pays the manufacturer for the car.

How Much should a t-shirt cost?

Despite being conscious of the "percentage of what" rule, I still got caught.  I have quite a supply of t-shirts (my wife would say an oversupply), mostly purchased at Costco for between $7 and $11 (CAD).  When I got a very personal-sounding letter from the Bay with a card promising a one-day 40% sale on all items, including those already on sale,  I couldn't resist.  I ended up buying a flashy red t-shirt which was already 40% off.  Practically giving it away, right?  This is what Paulos says in Innumeracy:

Canadians have been known to roll their eyes at the electoral college system, but the Canadian system is certainly no more democratic.  In Canada, a party with 39% of the popular vote can form a majority government and claim 100% of the power.

These days I'm pretty surly about answering surveys.  I have come to the conclusion that, almost invariably, my answers will be used to concoct something that I don't agree with.  I have already written about a number of such cases.  Consider, for example, the silly online survey the Liberal government put together when they were pretending that they were still interested in reforming the electoral process.  In completing the survey I was forced to decide between a parliament with many parties or one that could get things done in direct contradiction to my conviction that a parliament of many parties could get things done and get them done better and more democratically.

Similarly, when I read the headline that 72% of Canadians agreed with PM Trudeau's decision not to intervene in the Meng extradition, I was suspicious.  Sure enough, when I checked the question that Angus Reid asked ("percentage of what?" remember), the reason for the result was obvious. 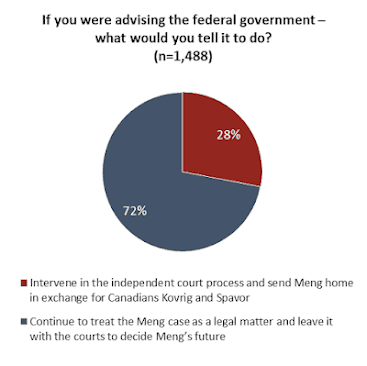 In order to answer the question, one would have to accept the false premise, the bald-faced lie, that extradition in Canada is "an independent court process" and "a legal matter" that can be left "with the courts to decide." In other words, 72% of Canadians who don't know the law--that extradition is a political decision in Canada--agreed with the Prime Minister.  Actually what the survey indicates is that 100% of Canadians don't know the law, including the Angus-Reid people and the Prime Minister.

That one out of eleven women will develop breast cancer is a much cited statistic. The figure is misleading, however, in that it applies only to an imaginary sample of women all of whom live to age eighty-five and whose incidence of contracting breast cancer at any given age is the present incidence rate for that age. Only a minority of women live to age eighty-five, and incidence rates are changing and are much higher for older women.

Breast cancer is a serious disease and must always be taken seriously, but presenting misleading statistics is the opposite of treating the disease seriously.  Based on the available numbers, Paulos calculated that "The typical forty-year-old has about a 1.4 percent chance of developing the disease before age fifty."

Discussing the statistics on breast cancer does not mitigate the significance of the disease, but raises the question of how misleading or miscommunicated percentages can be detrimental to women's overall health.  In an article entitled  "Hormone therapy and breast cancer: risk communication and the ‘perfect storm'," Dr. R.L. Reid notes that

When the WHI [Women's Health Initiative] reported a 26% increase in breast cancer among women using combined estrogen and progestin MHT [menopausal hormone therapy], few readers understood that this relative risk was derived from the data showing 30 breast cancers/10,000 women on placebo and 38/10,000 women on hormones. The absolute difference was eight additional breast cancers per 10,000 women per year. This amounts to an attributable risk of 0.08% per year or less than a 10th of a percentage point increase per year of use. (Indeed, the 74% of the enrolled women who were first-time hormone users showed no increased risk yet this received no media coverage.) Had the findings been conveyed to the media and the public in this way, we would not have seen the widespread panic that followed the 2002 WHI report.

Despite the recommendations of both Paulos and Reid that women should be given more detailed, precise statistical data, the Canadian Cancer Society continues to report that "1 in 8 Canadian women will develop breast cancer" and a decrease in breast cancers in "2002 coincided with a large drop in the use of HRT [hormone replacement therapy] among postmenopausal women when its role in breast cancer was publicized."

So what results when you have an increase of 1000% and then a decrease of 81%? The question is meaningless until you answer the question "percentage of what?"  Oddly, the article that tells us that GameStop stocks "have risen by 1,000 percent in less than two weeks," only gets around to answering the "of what?" question in a very convoluted, innumerate fashion: "the company's shares were changing hands at around $4 US a share. They hit almost $400 on Wednesday. First off,  if the stock rose from $4 to $400, that's an increase of 10,000% (ten thousand percent) not 1,000% (one thousand percent).  If the stock rose 1000% to $400 in two weeks, that means the stock had been selling for $40.