These days, the concept of "romantic irony" is particularly difficult to grasp for a number of reasons.  In the first place, the phrase was coined by Friedrich Schlegel, the German romanticist, who was vague and aphoristic in defining the concept.

The Meaning of "romantic"

Additionally, what Schlegel meant by "romantic" is a subject of debate.  According to the Stanford Encyclopedia of Philosophy:

What Schlegel meant by the term “romantic” and its apparent cognate "Roman" (usually translated as “novel,” but having among the Romantics a much wider sense) has long been disputed. [ . . .], Schlegel saw the historical origins of “the romantic” in the wide mixture of forms and genres that characterized medieval literature and took it as the point of departure for a genre-transcending notion that allows even Shakespeare's plays or Dante's Commedia to be Romane.

From a present-day perspective, "romantic irony" seems a contradiction in terms. We think of romance as implying passion, emotion and intimacy.  (See Understanding Romanticism.)  Irony, in direct contradiction, is aloof, intellectual and distant. The easiest way to get a handle on "romantic irony" is to simply think of it as the concept of irony as it emerged during the Romantic period of literary history in the late 18th and early 19th century.  "Romantic irony," like all other forms of irony, is "the interruption or disruption of an established or expected discourse."  (See What is Irony?)

The English example of romantic irony

The typical way that romantic irony interrupts a discourse is that the author signals to the reader of  a literary text that "oh, by the way, what you are reading is a fiction."  Laurence Sterne's Tristram Shandy is typically cited as an example of romantic irony.  These days this feature would typically be described as postmodern, which adds to the confusion about what romantic irony is. 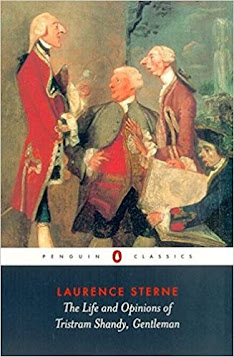 In fact, if you compared a "grocery list" of the typical features of postmodernism--crossing of genre boundaries, problematising of the self, challenging grand narratives, metanarrative, indeterminacy of the literary text, limitations of language to represent reality, etc--and those of romantic irony, the lists will extensively overlap.  You might even find them to be identical.