In Shakespeare: The Biography, Peter Ackroyd suggests that Shakespeare wrote Hamlet in a fit of depression reminiscing about the death of his 11-year-old son, Hamnet. I see lots of evidence in the play to support this view. When you stop to consider, as objectively as one can, the various elements of the play, it turns out to be incredibly self-indulgent.

If you were giving a playwrighting course and wanted a model to show students how not to write a play, Hamlet would work. We teachers of English are accustomed to referring to "Hamlet's procrastination," but what about Shakespeare's procrastination?  Come one, Will, get to the point! The play is too long, the mood is morose, meandering and depressive, the plot travels all over the place (literally) without any sense of direction (Eliot suggests it was written by a committee), the playwright (through his central character) criticizes the audience (the Globe [theatre] smells foul) and actors (they tear an emotional line to shreds). 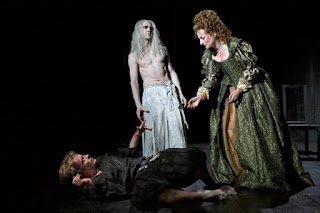 very rags, to split the ears of the groundlings, who [insults the audience]

first and now, was and is, to hold, as 'twere, the [maintain perspective]