I can't bring myself to sympathize with Saddam Hussein, but still, I think about the lead-up to the second Iraq war (which, by the way, cost 151,000 to 1,033,000 lives--depending on whose statistics you believe). Over and over again, in anticipation of the 2003 invasion, we were told that all Saddam had to do was turn over his "weapons of mass destruction."  Imagine Saddam's frustration!  He couldn't halt the invasion by turning over his weapons of mass destruction because he didn't have any.  Just saying he had no WMDs wasn't going to do anything because the US had the witness statements of Iraqi defectors, CIA intelligence reports, recordings and leaked documents, and, of course, the satellite images which Colin Powell presented to the UN.

I've read the Uyghur Forced Labor Act and its earlier drafts, the Forced Labor Enforcement Task Force "Report to Congress," and the Canada-United States-Mexico Agreement (aka USMC Implementation Act) in an effort to figure out what's really going on. According to the draft Act approved by Congress, the USA knows that China is using forced labour in Xinjiang because they have witness statements, "official media reports, publicly available documents, official statements, and official leaked documents from the Government of the People’s Republic of China" and, wait for it . . . "satellite imagery."  Of the reports, articles, documents and statements I've read, some assert that "China is the new evil empire" but none provide conclusive evidence of "forced labour." Of all the human rights abuses the Chinese regime is being accused of--mass incarceration without trial, repression of free speech and religion, coercive family planning, forced assimilation, invasive surveillance--the least evident and most difficult to prove would be "forced labour."

The Australia Strategic Policy Institute (ASPI) has taken the lead in providing satellite imagery of Xinjiang. The ASPI describes itself as "an independent, non-partisan think tank" but is equally forthcoming that most of its funding comes from Australia's Department of Defence and other government agencies.  Australia is of course a member of the Five Eyes intelligence alliance and has recently reinforced its allegiance with the USA in opposition to China. 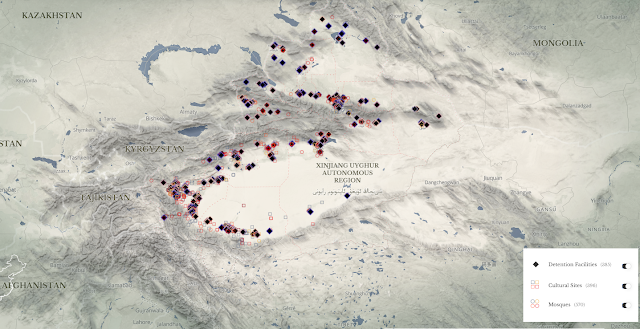 The ASPI's interactive map, indicating images of hundreds of detention centres, mosques and religious sites, still requires a leap of faith that what we are looking at--buildings with walls, turrets and fences--are in fact prisons, detention centres and re-education facilities whose inmates are used for forced labour.  The same suspension of disbelief that Collin Powell invoked when he showed satellite images of buildings in Iraq and told the UN that they were production and storage facilities for "weapons of mass destruction" is once again being called for.

Just as "weapons of mass destruction" provided the pretext for the war in Iraq when the protection of western oil interests was widely believed to be the more credible and obvious cause, this time "forced labor" is being used as an excuse to escalate the USA's geopolitical contest with China.  Of all the crimes that the USA might accuse China of, why focus on "forced labor"?  China has a history of moving its workforce from one part of the country to another, separating families for long periods of time.  Arguably, "forced labour" has been part of Chinese culture for thousands of years.  Why has Chinese "forced labor" become a US obsession in 2021-22?  How do you prove "forced labor" from thousands of miles away?

The Uyghur Forced Labor Act provides a simple solution in Section 3: "REBUTTABLE PRESUMPTION."  "Rebuttable presumption," a concept in law that, in the simplest of terms, means guilty until proven innocent.  Therefore, the US government is instructing Customs and Border Protection (CBP) to assume that anything being imported from China is the product of forced labour until proven otherwise.

What if China isn't using forced labour?  It really doesn't matter.  What is or isn't accepted into the USA will be determined through negotiations between CBP (and various other US intelligence services) and the American company doing the importing.  Contrary to my claim in the previous post, Walmart will no doubt lobby for an exemption.  As outlined in the New York Times article, "U.S. Effort to Combat Forced Labor Targets Corporate China Ties," Coke Cola, Nike and Apple have already begun lobbying.

Oh my naivety!  You may not have detected it but, in my previous posts, I was struck by how quickly and easily American legislators seemed to accept claims of genocide and human rights abuses without challenging the sources or questioning the substance of the evidence.  I was confounded by the fact that US legislators focused on "forced labor," the most difficult accusation to prove, rather than any other of claimed abuses.  I was unaware of the Tariff Act of 1930 and its recent amendments.  It is perhaps worth noting that until 2016, US law . . .

US legislators honed in on "forced labor" because the recently amended law was already on the books, in international and US law, against "forced labor."  This was the approach that would allow them to block, on a fairly ad hoc basis, any and all imports from China.  A law designed to protect against child labour, human trafficking, sexual exploitation and slave labour is being used to block the advancement of a global competitor.

Is Canada going to be played again?

Article 3 of the Uyghur Forced Labor Act requires the US government  . . .

(3) to coordinate with Mexico and Canada to effectively implement Article 23.6 of the United States-Mexico-Canada Agreement to prohibit the importation of goods produced in whole or in part by forced or compulsory labor, including those goods mined, produced, or manufactured wholly or in part in the Xinjiang Uyghur Autonomous Region;

Did US negotiators anticipate in the summer of 2020 when the USMC trade agreement was being signed and Canada had accepted "the China clause" barring a Canada-China free-trade deal without notifying the US, and Canada had accepted the US request to arrest Meng Wanzhou, the Huawei CFO, further driving a wedge between Canada and China, that they also had Article 23.6, an ace up the US sleeve, to further prevent trade between Canada and China? Will the Canadian government respond to the Uyghur Forced Labor Act and Article 23.6 of USMC, the same way they did the US-Canada Extradition Treaty in the Meng case? Will we once again find ourselves in a trade war with China to the detriment of Canada for the benefit of the USA? And the answer is . . .

It's a Done deal

According to the Government of Canada website entitled "Public Safety," the ban on "forced labour" imports became law in Canada two years ago.

Canada has imposed an importation ban on goods that were produced by forced labour, as described in An Act to implement the Agreement between Canada, the United States of America and the United Mexican States, which received Royal Assent on March 13, 2020. As described in paragraph 202(8), Chapter 98 item No. 9897.00.00 of the Customs Tariff, the law has been amended to include a reference prohibiting goods mined, manufactured or produced wholly or in part by forced labour. These amendments made under the Act came into force in Canada on July 1, 2020, as outlined in CBSA Customs Notice 20-23, Import prohibition on goods produced wholly or in part by forced labour.