The system runs on borrowed money

The cliché that “The system runs on borrowed money” is well known.  You might imagine that you are somehow removed from that “system.”  Whether you are aware or not, your country, state or province, your school, your job, your church, your city, and your household are all run on borrowed money.  Nonetheless, “borrowed money” is a funny/peculiar expression because it is redundant.  There is no other kind of money.

What is money?  Experts aren't sure.

Reading Graeber’s Debt:  The First 5000 Years I was bemused to discover that there is no consensus among the experts on what exactly money is.  (See   When Should You Repay Your Student Loan? ) Of course, we all know what money is, but it is one of those obvious, everyday concepts that makes perfect common sense until you start to think about it.

Historically, the debate has been between seeing money as a commodity like gold or silver (something that has a value) or viewing it as an IOU, a promise to pay issued by the government of a particular country.  These days money is either paper or, more likely, pixels on someone’s computer screen—nothing of value in itself.

Money:  Without the gold standard, a debt that can never be paid.

However, if money is an IOU, it is a very strange kind of debt because no-one ever expects it to be paid.  (In the old days, countries were expected to have a supply of gold in storage—the “gold standard”—to back up their currency and, in theory, you could request an exchange of paper money for gold.  Those days are long gone.  (See   When Should You Repay Your Student Loan? .)

Money is simply a system of measurement

If money isn’t a commodity and it isn’t an IOU, what is it?  Graeber points out that the dominant theory in major economies like those of the USA and Germany—and I must confess it has taken me a long time to get my head around this idea—is that money is just a measurement system like feet and inches or litres and cubic centimetres.

“Credit Theorists insisted that money is not a commodity but an accounting tool.  In other words, it is not a ‘thing’ at all. You can no more touch a dollar or a Deutschmark than you can touch an hour or a cubic centimetre.”

Money is a measurement of debt.

This is where the idea of “borrowing money” starts to get strange.  If money is just a measuring tool, imagine that you owe your buddy Georges 100 yards or you borrowed 300 miles from the bank to buy a house.  A hundred yards of what? Three hundred miles of what?

"The obvious next question is:  If money is just a yardstick, what then does it measure?  The answer was simple:  debt."

“Borrowed money,” then, is just a way of saying “borrowed debt” or, more precisely, "a borrowed quantity of borrowing."  Once you’ve grasped this concept everything else in the financial and banking system begins to make sense—sort of.  As I’ve pointed out a couple of times, the mainstream, conservative banking system uses a leverage ratio of 4%; that is, 1 to 25,  meaning if the bank has 1 million dollars, it can lend out 25 million or 25 times more than it actually has.  “Actually has” (in the previous sentence) doesn’t mean to possess in a physical sense because as we have just learned money is “not a thing at all” so “has” does not apply in a physical sense.

When you borrow, you create money, which is the measurement of your debt

To trace the chain of “borrowed money” backward:  if you get a mortgage from the bank for $300,000, you will never get to see or touch or smell that money, but it is understood that you now have 300,000 dollars (i.e., money = debt).  You don’t have the money in an ontological sense (that is, in the sense that it actually exists), but you and the banks have an understanding.

The more we “follow the money” the more imaginary and less real money becomes.  Following the leverage rules, it is understood that the bank does not have (in any sense of the word "have") the money it is lending you.  It is even understood that the bank has no understanding with anyone about the $300,000 you are borrowing prior to you borrowing it. Your $300,000 mortgage debt is created out of nothing, out of pure imagination.  It is a debt which you now owe to the bank.  It only exists as a piece of paper which you signed, meaning you created it for the bank's benefit out of nothing and which, by the way, the bank can turn around and sell or keep and claim as an asset in its bookkeeping. 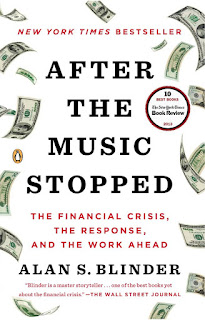 In After the Music Stopped:  The Financial Crisis, the Response and the Work Ahead, Alan S. Blinder, an economist and former vice-president at the Federal Reserve, is adamant that “We need a financial system with much less leverage” (his italics, page 55).  Banks may give the impression on their books that they are leveraged to a conservative ratio of 1 to 10 but, as Blinder points out, the largest investment banks in the USA were creating “synthetic leverage” (using leverage to invest in something that is also leveraged; therefore leverage on top of leverage) to create leverage ratios of up to 1 to 40.

If you want to understand what people are saying when they claim that the financial system was near collapse in 2008, consider a couple of salient facts.  The five companies that Blinder is talking about above—Bear Stearns, Lehman Brothers, Merrill Lynch, Morgan Stanley and Goldman Sachs—were the five largest in the USA.  Goldman Sachs, according to a French documentary I watched recently, has greater assets than the country of France (Goldman Sachs had $1.12 trillion in assets in 2007 according to Blinder).  Lehman Brothers, with assets of $691 billion, was allowed to go bankrupt.  To avoid bankruptcy, Merrill Lynch, with assets of $1.02 trillion, was forced to merge into the Bank of America.  As bankruptcy approached, Bear Sterns, with assets of 395 billion, was bought up, under government pressure, by JP Morgan Chase.  With these kinds of assets, how is it possible that these companies faced bankruptcy and needed government bailouts?

The simplest answer is that no matter how rich you are if you are lending 40 times more than you have on paper (or in pixels, if you prefer) then a 2.5% mishap can send you spiralling into bankruptcy.  Think about it.  You have a billion dollars on paper, so you lend 20 of your friends 2 billion each.  One of those friends screws up and comes to tell you that he can’t pay you the 2 billion.  He’s bankrupt.  Guess what, so are you now.  Remember you only had a billion dollars on paper (in pixels), so now you can’t claim that you have those pixels anymore.   But are you really bankrupt now?  Sure you can’t say you “have” a billion dollars anymore (whatever “have” means in this context), in fact, you are a billion dollars in the hole.  According to the banking rules, you can’t lend out any more money because you don’t “have” any money to leverage—which is a problem if you are a bank because lending money is what banks do.  However, since money is just a measurement of debt, you still “have” the other 38 billion that you lent to your other 19 friends—don’t you?

Listening to Yanis Varoufakis, former Greek Finance Minister, I learned there is an expression for what I described [above] a year ago:  Zombie Banks.  When banks no longer have the cash, the liquidity, the seed money, the "pixel dust," or whatever you want to call the million dollars that allows them to lend out 25 million, they stop lending money.  "Lending money" is the only reason for a bank to exist.  The bank is dead, insolvent, bankrupt, a zombie, but it continues to exist by receiving money from the national treasury, from taxpayers, which it hoards to itself to preserve the illusion that it is still a functioning bank.


High finance is like musical chairs until the music stops

The money game is a game of pretend.  The game only works if everyone believes or, as we say in literary studies, “suspends disbelief.” The game starts to fall apart when too many people start to notice that a billion-dollar or a trillion-dollar company doesn’t seem to have any money. You win the game by pretending that you “have” the money, even when it becomes obvious that no-one “has” the money.  All we have is the understanding that we all owe each other and the debt is measured in dollars or pesos or euros, etc, which is fine as long as we all understand the game and follow the same rules. 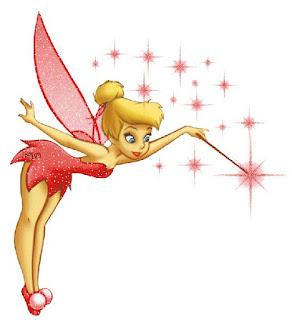 In my previous post, I described money as “pixy dust”—the magic stuff that Tinker Bell spreads with her wand in Peter Pan.  It wasn’t a metaphor that I thought about very much, but on second thought I’m a bit shocked by how accurate, how close to reality, that metaphor is.  Realizing that money is a kind of strange fiction that we have been convinced is the ultimate reality answers some of the questions I have asked in the past.  How is it possible that the USA is 17 trillion dollars in debt?  That the USA owes more American dollars than actually exist in circulation?  That every country in the world is in debt?  That the unregulated “derivatives” market is said to be between 700 trillion and 1.2 quadrillion dollars?  Since all these numbers are measurements of something that doesn’t really exist, they have no limits.  Nonetheless, I shouldn’t have called money “pixy dust.”  I really wish I had called it “pixel dust” the first time.  "Money is pixel dust!"  Spread it around!

Money makes the world go around!