Whenever I lectured on Romeo and Juliet, I always started by asking “Why did Shakespeare make Juliet thirteen years old?”  As I fielded answers from students they generally fell into two broad categories.

Category 1: “People in Shakespeare’s time married young.”  Actually they didn’t.  Shakespeare himself was 18 when he married Anne Hathaway who was 26 and pregnant with their first child, Susanna, but Shakespeare needed permission from his father to marry at such a young age.  Shakespeare’s own daughters, Susanna and Judith, were married at 24 and 31 respectively.

Our ideas of English girls’ marrying at thirteen (or younger) being common practice was likely provoked by infamous cases of royal betrothals.  For example, Mary Queen of Scots was sent to France to marry Francis, the Dauphin, when she was six.  She married him when she was sixteen and he was fourteen—he died three years later.  In 1480, ten-year-old Prince Edward was betrothed to the four-year-old daughter of Francis II, Duke of Brittany.  (According to another Shakespeare play, young Edward was murdered by his uncle, Richard III.) Such marriages were entirely intended to forge political alliances and tell us little or nothing about common attitudes concerning the appropriate age for marriage. Best estimates are that attitudes, though relative to life expectancy, were not wildly different in Shakespeare’s time from those of today.

The real Juliet was thirteen

Category 2.  “The ‘real Juliet’ was thirteen.”  Tourists visiting Verona today will be invited to see the balcony purported to be the one where Romeo proposed to Juliet.  That a “real Juliet” ever existed is doubtful.  The age of the woman who might have inspired the “Romeo and Juliet” story, if such a woman ever existed, is shrouded in a deeper level of the unknown.

Sources for the Romeo and Juliet story

Juliet is twenty-one in the Italian version of the story.  In the narrative poem in English by Arthur Brooke, THE TRAGICALL HISTORY OF ROMEUS AND JULIET, which is generally accepted to be Shakespeare’s source for the story, Juliet is sixteen.

Bill Bryson, At Home: A Short History of Private Life

The question remains: Why did Shakespeare make Juliet thirteen years old?  I would invariably tell students that the answer was quite obvious, and once they saw the answer they would better understand the play.  Imagine my surprise, shock and even dismay, reading Bill Bryson (who happens to be one of my favourite writers these days) who claims in At Home:  A Short History of Private Life that the reason Shakespeare made Juliet thirteen years old “is, like most of what Shakespeare did, unknowable” (397).

Shakespeare had a 13-year-old daughter

Unknowable?  Granted some inference is required, but in this case it is more a matter of arithmetic than literary theory.  Romeo and Juliet, the first quarto, was published in 1597—we can reasonably surmise that it was written and first performed around this time.  Shakespeare’s daughter was born May 26, 1583.  1597-1583 = 13!  Why did Shakespeare make Juliet thirteen years old?  Because he had a thirteen-year-old daughter (or at the very least she was on the verge of turning thirteen).

Shakespeare was obsessed with father-daughter relationships

As Peter Ackroyd points out in Shakespeare: A Biography, the relationship of “father and daughter” was one of Shakespeare’s “most enduring preoccupations” (449): Polonius and Ophelia, Shylock and Jessica, Lear and Cordelia, Brabantio and Desdemona, Baptista and Katherine, Duke Senior and Rosalind, Duke Frederick and Celia, to mention but a few.  (For more see https://www.enotes.com/topics/william-shakespeare/critical-essays/fathers-and-daughters-shakespeare#critical-essays-fathers-and-daughters-shakespeare-introduction).

Typically Shakespeare portrays these relationships as troubled and casts the fathers in an unflattering light.  The one extraordinary exception to this rule is Shakespeare’s last complete play, The Tempest, in which Miranda’s father, Prospero, has magical powers with which to grant his daughter her every wish and happiness.

In Act 1 of Romeo and Juliet we see Capulet firmly defending his daughter against an early marriage on the grounds that “too soon marred are those so early made.”  However, by Act III the political climate has obviously changed.  Although never explained in the play we are left to infer that a marriage to a relative of the Prince has become politically exigent, as Capulet now threatens to disown Juliet and abandon her in the street if she doesn’t “get to church o’ Thursday” to marry Paris.

Shakespeare drops lots of hints that he is thinking about Susanna

Shakespeare makes the age thirteen a repeated discussion in the play, and if we need an additional hint that he was thinking of his own thirteen-year-old daughter,  Susanna, he introduces  the name Susan—somewhat tangentially—into the dialogue about Juliet’s age.

Nurse:
She is not fourteen. How long is it now
To Lammas-tide?


Shakespeare's spelling of names was always approximate (including his own)

If “Susan” and “Susanna” strike you as completely different names consider, as Bryson points out in Shakespeare:  The World as Stage, in extant documents, Shakespeare never spelt his name the same way twice.  Ackroyd among others is categorical that “Hamlet” is a variation of the spelling of “Hamnet”—the name of Shakespeare’s son who died at age eleven.  And, of course, if  Shakespeare was following the Brooke poem he should have called his eponymous hero “Romeus” not “Romeo.”  In short, precision in the spelling of names was not part of Shakespearian culture.  The dialogue above explicitly tells us that “Susan”—a name we can reasonably surmise that Shakespeare called his own daughter—if she were in the play, would be thirteen.  How much of a wink and a nod do we need?

The theme of Romeo and Juliet is haste

Once the idea that the author was the father of a thirteen-year-old daughter takes hold, it becomes impossible to view the play as anything other than a cautionary tale about the risks of succumbing to enflamed passions, of rushing to hasty judgements, solutions and actions.  Haste, in a word, is the theme of the play—and haste, in the play, invariably leads to disaster. 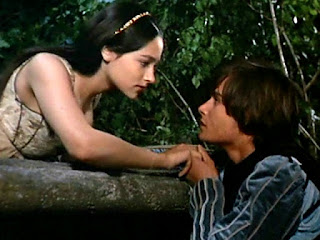 Mention of the play invariably brings to mind the “balcony scene” but, in context, Romeo and Juliet knew no more than these few minutes of happiness in the entirety of the play.  From beginning to end in the play their lives were replete with unrelieved anxiety, conflict, and sadness.  Even the consummation of their marriage is unable to alleviate the newfound misery of their existence as they immediately imagine each other “As one dead in the bottom of a tomb.”

Every major character in the play is guilty of haste

Romeo and Juliet provide the most poignant example but, in this play, every agent acts in haste and shares in the guilt of the disasters it provokes.  The passionate hatred between the Capulets and Montagues provides the ambience for the drama, but the underlying folly of haste is repeated by each of the characters in turn.  Tybalt is an icon of choler—boundless, unruled, passionate anger.  Mercutio, as his name suggests, is mercurial.  Even the Prince is hasty in his declaration that any Capulet or Montague caught fighting in the streets will be put to death, and must retract his declaration when Romeo kills Tybalt.  Paris pushes to marry thirteen-year-old Juliet and is supported in his haste by Lady Capulet and the Nurse.  Capulet at first resists this haste, then becomes its most egregious provocateur when he threatens Juliet with abandonment if she refuses to marry in two days time.  The tragedy could not have occurred without the active, ill-conceived, precipitous participation of the Nurse and Friar Lawrence.

Friar Lawrence is ultimately responsible for the tragedy

Friar Lawrence is the play’s raisonneur, providing the underlying ratiocination of the entire drama that “they stumble who run fast.” In other words, he is the author’s mouthpiece telling us that this play is about haste, but he is also the worst example of the haste which he platitudinously opposes. He marries Romeo and Juliet, then proposes that Romeo consummate the marriage, then devises the half-baked plan for Juliet to feign her own death, then fails to ensure that Romeo is informed of the plan, then, worst of all, abandons Juliet in the mausoleum where she eventually commits suicide.  In short, more than anyone else, Friar Lawrence is responsible for the tragedy, while paying lip service to the reasoning which could have prevented it.


Some readers might find it odd that Shakespeare made his spokesman the unwitting cause of the tragedy, but self mockery seems a common feature of his plays.  The terrible or feeble fathers which populate his plays are clear examples of his self-effacement.  One particularly visual example is the Shakespeare crest which William Shakespeare commissioned, the motif of which—black diagonal against a yellow background—he mocked mercilessly in his comedy Twelfth Night.   The butt of endless jokes, Malvolio is lampooned for believing that his Mistress will admire his being “in yellow stockings, and cross-gartered.” 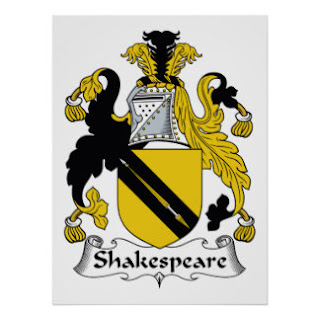 Maybe my students were right all along

Some editors reduce Susanna Shakespeare's "presence" in the play

In The Norton Shakespeare Greenblatt glosses this speech as meaning "The Nurse evidently suckled Juliet after her own daughter died." However, another possible interpretation is that Susan was Juliet's sister--a sister of similar age or even a twin--the child that Capulet is referring to when he tells Paris that Juliet is an only child because "Earth has swallowed all my hopes but she."  Greenblatt removes this quote from the play and, in a footnote, claims "probably rejected by Shakespeare in the writing process."  Removing Capulet's explanation of how Juliet came to be an only child reinforces Greenblatt's interpretation of the Nurse's speech.  Most versions of Romeo and Juliet that I have read or seen retain Capulet's claim, including the online version at

Eliminating Shakespeare from the study of his plays is a mistake

If we continue with this process so unfashionable in postmodern literary criticism (see After the Death of the Author)  of connecting the text to the author, we would note that Shakespeare's son Hamnet, died in 1596, the year before the quarto publication of Romeo and Juliet, and that he was a twin.  Nothing precise or definitive, but additional reason for us to imagine that Shakespeare was thinking about his own children when he wrote the play.

http://internetshakespeare.uvic.ca/Library/SLT/society/family/marriage.html#juliet
Posted by Jay Sour at 15:47 No comments: