The Irony of English grammar

The irony of English grammar is that we impose it most on the people who need it the least:  second- or foreign-language learners.  (See The "Ball of String" Theory.) Anyone who teaches English will, at some point, feel compelled to tell the fib that you need grammar to communicate and be understood in English.  This claim is pretty easy to disprove. Consider the following sentence:

An astute English teacher will point out that this five-word sentence contains at least six errors of grammar:  1) wrong case of pronoun, 2) wrong verb tense, 3) error of subject-verb agreement, 4) missing preposition for the indirect object, 5) faulty syntax, 6) missing indefinite article/determiner.  All this to say that the sentence should be:

"I ate in an Italian restaurant yesterday."

However, most native speakers of English would have little doubt about the intended meaning of the garbled sentence despite its multiple errors of grammar.  (A message full of errors circulated on the internet some time ago, demonstrating that native English speakers can understand even a long message which contains mistakes in every single word.  I'll attach it to the end of this post.)

It took me about ten years of correcting hundreds (probably thousands) of faulty sentences before the epiphany finally dawned on me.  The fact that I was able to correct the grammar was proof that I always understood the intended meaning of the original ungrammatical sentences.  Or, to reverse the insight, if I didn't know what the person was trying to say, I wouldn't have been able to correct the grammar. So much for "you need grammar to be understood."

I'll go out on a limb here and suggest that most native speakers don't know the grammar that we expect language students to learn.  Test yourself.

2.  What's the difference between "I've seen Star Wars" and "I saw Star Wars"?

3.  What's the difference between "I'm studying history" and "I study history"?

I downloaded and installed the free version of the Grammarly app for this post.  This isn't a scientific evaluation of Grammarly or even a review (but something to consider for a future post).  However, I find the results instructive.  Grammarly detected that "which" sentence #4, "less" in #5 and "I" in #7 were mistakes.  According to Grammarly, both quoted sentences in #6 are correct.   Both sentences being right is impossible, but I understand the Grammarly decision.  According to proper prescriptive grammar, "he is bigger than I" is correct, but for most native speakers "bigger than me" just sounds better.

To give credit where credit is due, I have made a few changes as I have been typing based on Grammarly suggestions.  On the other hand, here are a couple of sentences that I correctly predicted Grammarly would not know how to deal with.

The sentence is necessarily awkward, but not ungrammatical. Grammarly cannot accept a sentence in which "the" and "Mr." appear consecutively.

"I have seen that movie yesterday."

Interestingly, the verb tense in this sentence (above) is wrong, but Grammarly does not detect the mistake.  When a specific time in the past is indicated, you must use the simple past tense (not the present perfect, "have seen").  (See The Truth about English Verb Tenses.)

Most revealing, in the garbled sentence with which I began this post--"Me eats restaurant Italian yesterday."--Grammarly detects only one mistake.  According to Grammarly, "me" should be "I", consequently "eats" must then be "eat."  However, your final sentence would then be "I eat restaurant Italian yesterday"--which Grammarly declares error-free.

The important point to glean here is exactly the one I made at the top: in order to correct the grammar, you must already understand the intended meaning of the sentence.  If the app doesn't understand your sentence, can't read your intended meaning, it will not be able to correct your grammar.

When the argument that communication is the underlying necessity of English grammar falters, we English teachers typically turn to the analogy that grammar is like dress codes. You know, you have to dress properly for the occasion.  I can still remember telling a class of would-be professional writers studying Applied Grammar that "of course, you wouldn't wear a baseball cap with a tuxedo."  Two weeks later (and I'm not making this up) at the Grammy Awards all the hip-hop artists were wearing jewel-encrusted baseball caps with their tuxedos.


"Rules are meant to be broken."

The feature that grammar and dress codes share is that in both cases "the rules are meant to be broken." While we tell students that you need grammar to "get on in the world," the Rolling Stones have gotten on pretty well with "I Can't Get No Satisfaction."  And then there is the Nobel Laureate in Literature who wrote "It Ain't Me Babe."  Could pop music survive without that anathema to English grammar: "ain't"?  (By the way, Grammarly accepts "ain't.")

As General MacArthur once quipped, "You are remembered for the rules you break"--which is probably why breaking the rules of grammar and dress codes has such appeal. 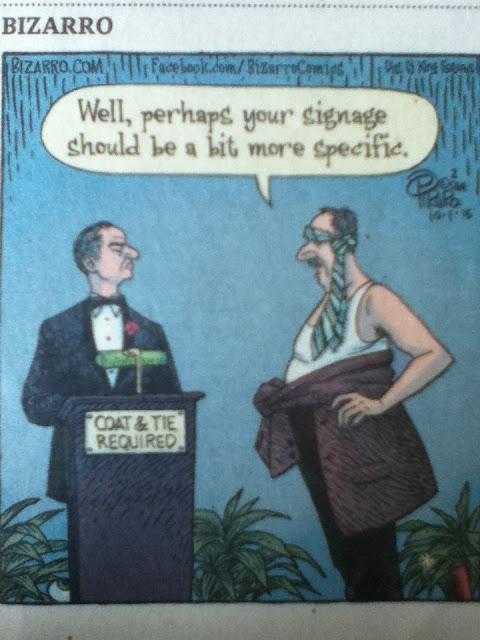 The complete MacArthur quote is "Rules are mostly meant to be broken and are too often for the lazy to hide behind."  The second half of the aphorism is particularly apt and rarely quoted.  The rules of grammar, as I endlessly pointed out to students, were the beginning of the thinking process, not the end. Grammar changes over time, it varies from one region to another, and it is tied to linguistic register. Once you know the rules, then you need to consider how they should be applied and even when to break them.

Knowing a few of the rules of English grammar isn't a license to bully, for one-up-manship or rudeness. I find it strange that individuals would proudly declare themselves "grammar nazis" online, since the dysphemism implies someone following rules without understanding or appreciating them--their intentions, consequences, validity, basis or morality.  I've seen dozens of different versions of this poster: 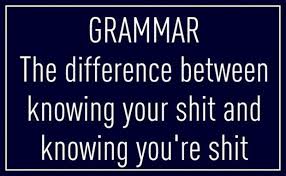 I really don't know how I am supposed to feel about this sign.  For one thing, this is a very specific mistake that some grammar nazi has dreamed up that I can't imagine anyone actually making. Plus, it isn't very . . . well . . . grammatical. It makes me think of this other sign: 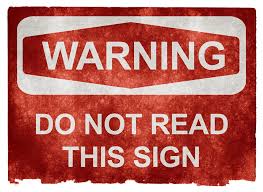 If grammar really is about "knowing shit," with or without an apostrophe seems a minor problem.  The fact that "their," "there" and "they're" (like "your," "you're" and "yore") are pronounced the same way but have such different meanings and usages tells me more about the underlying incoherence of the English language than about those individuals who are occasionally guilty of their /there/ they're misuse.  (While I'm at it, here's a prediction.  Sometime in the not-too-distant future, "they're" and "you're" will disappear from the English language; "your" and "their" will become not only accepted but consider correct English.  Dictionaries will begin to identify "they're" and "you're" as "archaic.")

The Origins of English grammar

The origins of English grammar (or grammars) can be traced to the 18th century, in particular to Jonathan Swift's "A Proposal for Correcting, Improving and Ascertaining the English Tongue," in which he decried the fact that contemporary authors (like himself):  "will be read with Pleasure but a very few Years, and in an Age or two shall hardly be understood without an Interpreter." Swift's Gulliver's Travels has survived better than the average 18th-century text; however, despite the fact that we continue to browbeat highschool students into reading Shakespeare's 17th-century dramas, few people these days (despite vainglorious claims to the contrary) can read the writers of 400-years past without an interpreter (or at least an interpretation).

Although the rules of grammar were supposed to pave the path to immortality for English writers, what was actually produced was Robert Lowth's  A Short Introduction to English Grammar: With Critical Notes (published and republished 50 times from 1762 to 1800) from which we are instructed,  based on the spurious notion that English should follow the rules of Latin, that a sentence cannot end with a preposition and we must not split an infinitive.  (See: What Is English Grammar? for more.)

In keeping with my "Do not read this sign" sign,  in "The 'rules' of grammar are made up, so why bother following them?" Tiger Webb points out:

That Lowth, like many after him, broke most of these so-called "rules" in his own writing — or that some of his examples of substandard English came from the writings of Jonathan Swift — went unremarked upon at the time.

Taylor Swift vs. Jonathan Swift vs. The Princeton Review

I came across this comedic grammar kerfuffle in Penny Adam's "Is there simply ‘good’ and ‘bad’ English? Are you with Taylor or Jonathan Swift on grammar? in which she provided a link to an article in The Guardian entitled "Taylor Swift’s grammar marked down incorrectly."  The details are funny enough to make for entertaining reading, but the short version is that The Princeton Review, a company which helps students prepare for college admission exams, used a line from Taylor Swift's song, Fifteen, on one of their practice tests as an example of "bad grammar."  Swift herself responded, pointing out that The Review had gotten the line wrong.  In a superlative example of "after shooting yourself in the left foot, how to take perfect aim at your right," The Review responded that the corrected quotation was also "bad grammar" because the plural pronoun "them" could not be used to refer to the singular subject "somebody."  (We are back to The Pronoun Wars, dear Reader--click the link if you need a reminder.)  The Review, being unaware of what is now widely known as the singular they, was pretty much laughed off the internet.   On the other hand, the brouhaha has given us a first answer to "Who needs English grammar?"  Apparently, if you are applying for admission to an American university, you should know some prescriptive grammar.

[To be continued in "Who Needs English Grammar:  Part II"]

Can you read this?


Only great
minds can read this.
This is weird, but interesting!
fi yuo cna raed
tihs, yuo hvae a sgtrane mnid too


The rset can be a taotl mses and
you can sitll raed it whotuit a pboerlm.


Tihs is bcuseae the huamn mnid deos not
raed ervey lteter by istlef, but the wrod as a wlohe.