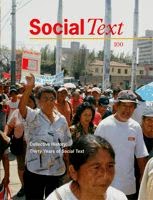 The idea that a couple of hundred specialists might gather at a conference to spout this turgid, empty language at one another, playing verbal puzzle games, didn’t really disturb me all that much.  Though it did seem a terrible waste of time and brainpower.  What did disturb me was to see students chastised for failing to “theorize” and “problematize” as if these terms signaled an accomplishment.  It disturbed me to see students struggling to understand theories which didn’t hold water and being forced, like their professors, to pretend they made sense and were being grasped;  or, worse still, simply being turned off the study of literature and culture because it had been transformed into the study of obtuse theories.

Then, of course, there was my dilemma of how to negotiate the hypocrisy:  teaching theories I really didn’t find credible.  In my research and publications, I think I did alright:  showing that I had read the post-structuralists while signaling that I wasn’t really buying the theories they were selling (citing Sokal and Bricmont for example).  Teaching undergraduates, I could cherry-pick concepts and vocabulary, acknowledging their soi-disant origins, but spinning them, à la Rumpelstiltskin, into something that made sense; that is, that made sense to me, and could be transformed into something that made sense and was even useful for students.  I could explain deconstruction, as Ellis does in Against Deconstruction, in terms of the many challenges to essentialism (the idea that words get their meanings from one-to-one correspondence with the “essences” of objects in the world).  While acknowledging that the un-readable Kristeva did the earliest work on the important and useful concept of intertextuality, I could quickly turn to Graham Allen’s accessible description of the idea (in Intertextuality) that “meaning [. . . .] exists between a text and the other texts to which it refers and relates” rather than within an independent text.  The ubiquitous concept of “the subject” as an unstable site of consciousness, so typically associated with Lacanian psychoanalysis, is what the philosophy of mind is all about and could be explained in that context.


The Imposition of Postmodern Dogma on Students

Perhaps the most important part of Beyond the Hoax is its preface.  There Sokal concludes, from the surprising attention which the hoax received (though I always felt it didn’t receive enough), that “a not insignificant cohort of adults recall having endured, as undergraduates, an English, cultural studies or women’s studies course overly filled with Lacanian or deconstructionist verbiage, and who may have doubted their own intellectual competence as a result.”  On a broader, political level, Sokal quotes Noam Chomsky’s complaint that postmodernist intellectuals, while claiming a leftist agenda, have actually deprived working people of the tools of emancipation by claiming “that the ‘project of the Enlightenment is dead,’ that we must abandon the ‘illusions’ of science and rationality -- a message that will gladden the hearts of the powerful, delighted to monopolize these instruments for their own use.”  To substantiate Chomsky’s point, consider the fact that we have been told ad infinitum by postmodernists that “common sense” and “binary thinking” (the only kind of thinking that the human brain is capable of) are evidence of right-wing, conservative ideology.

The Sokal hoax provided a healthy revelation of what we were allowing to happen inside academia, but I’m less sure that the revelation has made its way into university classrooms.  As much as I admire what Sokal has accomplished, as he clarified his objectives in perpetrating the hoax and clarified the terms of the debate between postmodernist constructionist and empirical scientists, I found myself sliding back to where I had come from among the phenomenologists and skeptics.  The question, which is as old as philosophy itself, boils down to: “Is there an objective reality, uncontaminated by our perceptions and intentions, that we can have access to?”  Science must answer yes because the study of that reality is its defining objective.  Cultural-studies academics like me, unimpressed as I am with post-structuralism, are destined by discipline, like the ancient Greek philosophers of the 4th and 3rd centuries BCE, to remain skeptical.