The Panda and the Beaver

The Difference between pandas and beavers

The panda and the beaver are very different animals.  The panda is big and black and white, eats bamboo and likes to sleep in the top of trees.  The beaver is small and brown, eats maple trees and lives inside a beaver damn.  Beavers and pandas don't have much to do with each other, except that eating maple trees is good for bamboo, and eating bamboo helps the growth of maple trees, so they got along.  Then one day the eagle told the beaver, those pandas have been helping the leopards, so you should grab that panda cub when she comes near your pond.  Beavers always do what the eagle tells them to, so they did.  They grabbed the panda cub and brought her underwater to their lodge.  The beavers treated the panda cub very nicely because beavers are nice.  When the pandas saw what the beavers had done they were very upset and they grabbed two beavers and brought them to the top of the trees.  Beavers don't like being high in the air--pandas aren't nice like beavers.  Then the pandas began to drain the water out of the beaver pond--pandas really aren't nice like beavers. 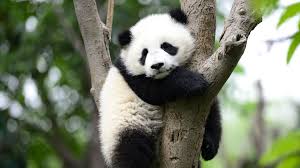 When they saw what was happening the beavers did what beavers do, they slapped their tails against the water to make a loud noise.  When the eagle heard the noise he understood and said: "Yes, what the pandas are doing isn't nice!"  The beaver slapped its tail some more and the rooster and the lion and the kite and the falcon and camel all agreed that "the pandas weren't nice like the beavers."  And the beavers all agreed "we're nice, but the pandas aren't."  But the bear and the crocodile and the cobra and the leopard and lots of other animals still seemed to like the pandas.  So the beavers told themselves some more, "Pandas aren't nice like beavers."  But the two beavers stayed in the trees and the pandas continued to drain the pond. 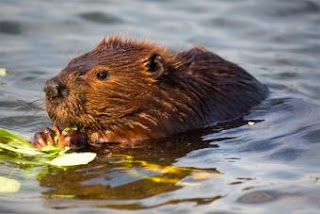 Is the panda a dragon?  What kind of dragon? 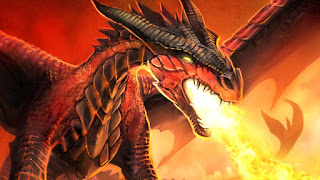 Enough Aesop's already--except to quote a line from a documentary on China and the New Silk Road:  "China is a friendly dragon, but it's still a dragon."  Canada's relationship with China, its second-largest trading partner, is the most acute and urgent problem facing legislators, but I heard no substantive discussion of the issue during the recent election campaigns.  Only one politician, Yves-François Blanchet, leader of the Bloc Québécois dared to mention China in the leadership debate.  Blanchet proclaimed that it was foolish of Canada to arrest the Huawei CFO, trying to flex muscles that it did not have before China. In his report on the debate, Paul Welles, in keeping with what has become the Anglo-Canadian journalistic meme, took the opportunity to play to Anglo-Canadian self-righteousness mixed with a bit of Quebec bashing, while alluding to how law-abiding we have been been in arresting Meng.

He [Blanchet] did say arresting Huawei executive Meng Wanzhou “may have been a big mistake,” which I will take as his way of letting everyone know that a sovereign Quebec would ignore its obligations under extradition treaties.


Had Welles taking 45 minutes to consult the Canadian Extradition Act, or the  Treaty on Extradition Between the Government of Canada and the Government of the United States of America, or even the Public Prosecutor Service of Canada's clear instruction that "Extradition treaties do not themselves create an obligation or a power to arrest in Canada," he might have reconsidered his mockery of Blanchet.  However, these days the job of most Canadian journalists is to repeat not to research.

For most of its history, Canada's economy has depended on trade with the USA to function and survive.  However, China has been challenging the USA as the world's largest and most powerful economy.  As the USA has adopted a fuck-you-if-you're-not-American economic policy, China has been subsidizing massive infrastructure projects all over the world--hundreds of billions spent in 65 different countries so far.   The size and scope of Chinese global subsidies have been compared to the USA's Marshall Plan after the Second World War. 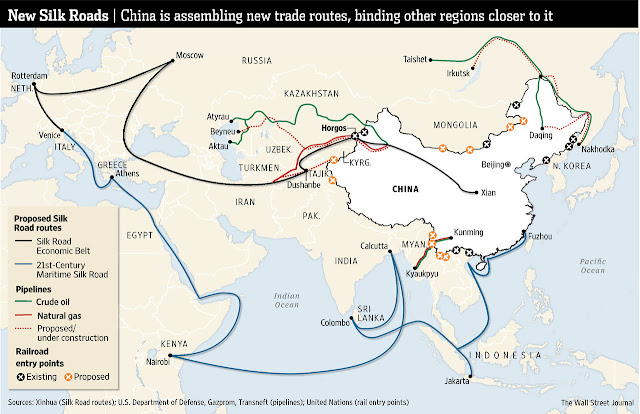 How should Canada behave in this battle of Titans?

A number of editorials and Jonathan Manthorpe's recent monograph, Claws of the Panda:  Beijing's Campaign of Influence and Intimidation in Canada emphasize that we should mistrust and fear the current Chinese regime. 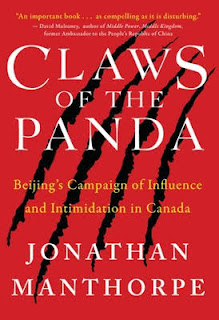 Okay.  Once fear and mistrust have been established, then what?  Manthrope judiciously points out that "engagement with China cannot and should not be avoided" and claims that his book is not "arguing that Canada should distance itself from the current regime in Beijing."  However, since his premise is that representatives of Chinese diplomacy or business can be viewed as "spies" for a "fascist" regime in Beijing, a thick cloud of suspicion is cast over virtually every interaction between Canada and China.

Here's the smoke, where's the fire?

In these cautionings about Canada becoming too cozy with China, concrete examples and hard evidence never quite match the level of the sensational rhetoric and headlines.  The essayists'  evidence is often in the form of guarded references and allusions to CSIS (the Canadian Security and Intelligence Service).  CSIS itself is part of the problem.  Our Intelligence Service has yet to gain the recognition of the population or the confidence of our political class.  (This is, after all, the organization that Arthur Porter, who was convicted of receiving $22 million in bribes from SNC-Lavalin, was tasked with overseeing.)  Evidence, purportedly coming from CSIS, of Chinese malfeasance, is in the form of leaks and anonymous sources--all under the required veil of secrecy.  When there are supporting public documents such as the  National Security and Intelligence Committee of Parliamentarians Annual Report 2018, they don't quite live up to the dire, definitive headline:  "It's official – China is a threat to Canada's national security."  Or, as in the case of Rethinking Security: China and the Age of Strategic Rivalry, linked on the CSIS website, we are informed that what we are reading is not a CSIS report but the opinions of un-named academics. Ultimately, when Manthorpe offers potential solutions, they sound much more like the status quo, a (re)new(ed) cold war, or simply too abstract to be meaningful:

. . .  future governments in Ottawa need to prepare the ground. They need to cement political, economic, social, and security ties within NATO and the G7, along with other like-minded countries. Canadian politicians need to assume a much tougher and more self-assured attitude toward Beijing than is now the case.

If these are the solutions, can the threat to Canada be that dramatic?

The Examples of Australia and New Zealand

Warnings of the Chinese threat in Canada typically cite the examples of New Zealand and Australia.  In fact, when the argument is being presented that China is a threat to Canadian sovereignty the authors most frequently quoted are from Australia and New Zealand--Clive Hamilton and Anne-Marie Brady respectively. (See, for example,"Academic who blew the whistle on China's influence on Australia says Canada is in even worse trouble, [take note of the quite innocent but dire looking photo] and  "How China uses shadowy United Front as 'magic weapon' to try to extend its influence in Canada."  Both articles published in the National Post.)

I agree with Manthorpe that the Australians have been a "good deal louder" than us in discussing their relations with China.  Watching the Australian television series Pine Gap, I was struck by how the challenge of being in the middle of a China-versus-USA conflict is forefront in the Australian imagination.   Fiction aside, Pine Gap is, in reality, a "US satellite surveillance base" run jointly by Australia and the USA.  "The station is partly run by the US Central Intelligence Agency (CIA), US National Security Agency (NSA), and US National Reconnaissance Office (NRO) and is a key contributor to the NSA's global interception effort, which included the ECHELON program."  If you watch the tv series to the end, you will discover that these fictional Australians are much more concerned by the recklessness of the American regime than by the financial investments of a Chinese businessman in their communities.

There is more to fear than fear itself

It makes perfect sense to be wary of Chinese investments and influence in Canada, particularly as China is expanding its global empire and, in some instances, using debt-trap diplomacy to achieve its objectives.  There is no doubt that the current regime in China espouses and promulgates a system of values which runs counter to the dominant values of the West.  General Secretary Xi Jinping's Document 9 on the Current State of the Ideological Sphere clearly and explicitly spells out those differences.  We need to have an open, public discussion of Canada's relationships with China.  Describing those relationships as "a war" and couching the discussion in terms of espionage do not strike me as helpful.  At the moment we seem to have fear-mongering in one corner and naivety in the other, but willful ignorance about everything in between.  The absolute refusal of Canadian politicians and media to discuss all aspects of the Meng arrest is evidence of our current inability to have an open discussion.

Global News published a commentary this morning in which it is observed that "Meng is living in a gilded cage at one of her two multi-million dollar homes in Vancouver and is free to go shopping and eat out."  How many times do we need to hear this beside-the-point inanity before someone finally asks, "Were we justified in arresting her in the first place?"

Jonathan Manthorpe was invited to discuss his book on TVO's The Agenda.  The episode, Exposing China's Influence in Canada, was bookended by references to Canada's arrest of Meng.  Both the introduction to the show and Manthorpe's penultimate answer referred to the arrest of the Huawei CFO. However, in discussing the "Huawei affair,"  Manthorpe described it as "the kidnapping and holding hostage of two Canadians."  Not a single word was spoken about the Meng arrest which precipitated this reprehensible response.  I certainly agree with Manthorpe that in our dealings with China we have to ask "How does this benefit Canada?"   How has arresting Meng benefited Canada?