Showing posts with the label Thomas Harvey
Show All 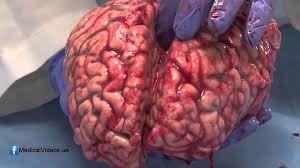 Einstein's physical brain Browsing social media I discovered the claim that there is irrefutable empirical evidence that Einstein's brain was physically different from those of the rest of us.  Seems obvious, unless you have a friend who is a neuropathologist (which I do) who has actually seen a few human brains and can feed you some of the current research on the question.  In an article entitled "Neuromythology of Einstein's Brain" published in Brain and Cognition , Terence Hines does a convincing job of debunking the myths and the various scientific experiments claiming to have proven that Einstein's brain was physically exceptional. Histology, glial cells, astrocytes, and "Did you know Einstein was dyslexic?" No doubt well-known among brainiacs but news to me, when Einstein died in 1955 at the age of 76, he had requested that his body be cremated.  However, Thomas Harvey, the pathologist who conducted the autopsy took the incredible liberty
3 comments
Read more
More posts