Irony is the interruption or disruption of an established or expected discourse.  (This definition might not seem immediately helpful, but bear with me.)   Let's begin with a simple example of verbal irony.  You and a friend are looking out the window on a cold and rainy day.  Your friend says, "Beautiful weather."   Your friend is being ironic.  In the context, the "expected discourse" is "what terrible weather!"  You assume that what your friend "really" means is that the weather is terrible because that is what you would expect him to say.  In fact, some people claim that "saying the opposite of what you mean" is a definition of verbal irony.  However, it is rare that the intended meaning of an ironic statement is exactly the opposite of what is said.  Irony is almost always ambiguous (see Do No Harm:  Avoid Irony).

There are three different kinds of irony:  verbal irony, situational irony and dramatic irony.  Irony resists definition because these three types of irony seem totally different from and unrelated to each other.  Verbal iron is saying one thing but meaning something completely different (nearly the opposite) of what is said. (As in the example above.) Situational irony is when what happens seems surprisingly, strikingly different from what you expect to happen.  (Example:  A ballerina, famous for her balance and grace, trips and falls while crossing the street.)  Dramatic irony is when we in the audience know something that the characters in a play or film don't. (Example:  John's best friend Peter is hiding in the bedroom closet.  We, the audience, know Peter is there and has been sleeping with John's wife.  In this dramatic or comic situation, John's telling his wife how much he admires his good friend Peter is dramatic irony.)  What each of these three different types of irony share is that they are the interruption or disruption of an established or expected discourse. 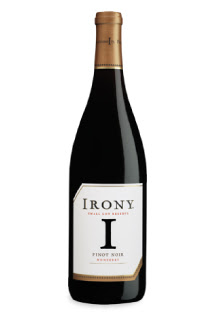 What is a discourse?

A statement, a speech, an announcement, a text, a paragraph can all be synonyms for "a discourse."  When we talk about "discourse" what we are referring to are all the ways in which sentences or utterances or images are connected together.  Analyzing the discourse of a paragraph, we could be looking at something as simple as the words used to connect one sentence to the next--words like "however," "although," "furthermore," "therefore" and "consequently" which connect one sentence to another and tell us the relationship between two sentences.  In the discourse analysis of a speech or a television commercial or a literary work, we might consider the themes, motifs, tone, style, patterns of repetition, the use of specific words or images; in short, all the elements that hold the parts together.

Disrupting the discourse of a eulogy

Imagine that Felix is delivering the eulogy at the funeral of his best friend George.  In the middle of expressions of admiration and his sadness at the loss of his friend,  Felix inserts "and George was a terrible golfer." This interruption of the tone and theme and formal register of the eulogy would be understood as irony.  What exactly does "and George was a terrible golfer" mean in this context?  It doesn't mean that Felix has decided to criticize George's golf at this moment.  Nor does it mean the opposite, that "George was an excellent golf."  Exactly what an ironic statement means is always ambiguous.  Why did Felix say it?  We can imagine lots of good reasons for Felix's decision to interrupt his own discourse.  Irony--among men--often signals a bond of mutual understanding and communication.  (You can tell that two men are old and good friends by the way they freely insult each other.)   Felix may have wanted to lighten the tone.  The aside and comic relief are typical instances of irony.  Perhaps Felix knew that too much sadness, even at a funeral, wasn't George's style and this interruption would hold back the pathos. The irony might even make people laugh; even at funerals it is sometimes good to laugh.

Can a situation be a discourse?

Anything can be called "a text."  (See Structuralism, semiotics and readings of the everyday world.)  Since anything--your life, my life, what happened at lunch today--can be considered and "read" as a "text," it can be analyzed as discourse.  So:  today at lunch you decided to abandon your habit of eating junk food and opted for the "healthful salad" instead . . . and consequently got food poising.  That is ironic.  The expected discourse of your narrative (the story of your lunch) and your decision was that you were going to be healthier, but the opposite (or near opposite) happened--you got sick.

Even dramatic irony interrupts a discourse

The basis of dramatic irony is that we know something that a character doesn't.  The literary critic Northrop Frye describe any literary work where the reader felt superior to the characters as being in the "ironic mode."  In my example above, we can see that John's, the cuckold's, discourse is interrupted and disrupted by our knowledge of the fact that Peter is hiding in the closet.

Irony as a trope or figure of speech

A potential problem with what I've been saying here is that every trope or figure of speech is a disruption of literal discourse.  When Mary announces that "John is a pig," she is speaking metaphorically--even if she is unaware of the fact.  Her statement is a trope, a turning away from, the literal meaning of her words.  She is not saying that John is a four-legged source of pork chops.

As Paul de Mann has claimed, "Irony is the trope of tropes" ("The Concept of Irony," Aesthetic Ideology). Viewed in the other direction, every figure of speech is a shift, a disruption or interruption, moving the discourse from a literal meaning to a figurative meaning. Each of these figurative shifts is minor or subtle or micro or partial or local in relation to the macro shift of irony.  Consider the possibility that when Mary says "John is a pig," she is being both metaphoric and ironic.  The metaphoric level of her words is minor; in fact, would go un-noticed.  However, if she is being ironic--let's imagine that everyone knows that John is obsessively neat and clean--then the shift of meaning is of another magnitude.

I find it instructive that when millennials encounter a delightful example of irony, they often describe it, gleefully, as "random."  It is an intuitive observation that irony disturbs a pattern or sense of order by introducing a non sequitur; that is, something disconnected, that doesn't fit and might, in the extreme, seem completely "random."


The origins of "irony"

The word "irony" is derived from a stock character in Greek comedy known as the eiron--the superficially "dumb guy" who turns out to be quite clever.  The eiron is a dissembler who hides his intelligence beneath a facade of ignorance and humility.   There is no verb in English for "being ironic" but, if we wanted to imagine a good possibility, it would be a combination of "dissemble" (meaning to disguise or the opposite of "resemble') and "disassemble" (meaning to take apart--in this case, the expected discourse).

Paul de Mann suggests that, as a rhetorical feature, irony is basically parabasis; that is, a shift of register in a discourse.  (De Mann's observation is the inspiration for my definition of irony.) The typical example of parabasis is an aside, but the etymological root is the chorus in Greek theatre which would interrupt the actors' speeches with their own comments. 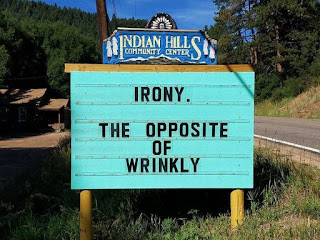 If all this seems too much to hold onto, a simple definition of irony would be "The near opposite of what is expected happening or being said." By the way, in this post, I have included the image of an "Irony" wine bottle.  Other than the name the image doesn't have much to do with the post:   I was being ironic. 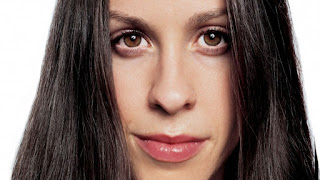 Actually the song is about situational irony, and I assume her critics were expecting verbal irony.  How ironic!