Best News Ever for Teachers: Everything Works!

The most brilliant statement I’ve ever heard about teaching and learning was “Everything works!”  Early in my career I taught basic-level ESL to new recruits at a military base. As my buddy Bob used to say, if you can teach a language, you can teach anything.  Your baseline assumption in teaching a language is that your students don’t understand what you are saying--a good assumption to consider no matter what you are teaching.  You’d be amazed how slow some teachers are in catching on to this idea, and resolve that talking faster and louder is the best possible response to students’ looks of incomprehension.  Figuring out what your students already know, what they are capable of doing and understanding, and adding something new to that mix is what I mean by the word “teaching.”  The questions is:  “How?”  And the answer is, guess what:  “Everything works!”

I was having lunch at the officers mess with Gustine Schuster when Dave Eliot joined us and began bubbling enthusiastically (Dave was a chronic enthusiast) about a new method he was trying out and that “It actually works!”  Gustine responded coolly (which was odd because Gustine was typically the epitome of personal warmth), “Everything works!”  Dave hardly missed a beat as he tried to continue his success story.  “Dave!” Gustine had to finally call him up short,  “everything works!”  In the history of teaching and learning languages, as Gustine explained, every numbskull, irrational, idiotic method of teaching can claim some degree of success.  In fact, some methods have succeeded quite well even though logic dictates that they shouldn’t have. People, especially children, are programmed to learn, especially languages, and they will manage to learn something, no matter how flawed the methods used in teaching them.  People who think they have taught children to talk are like those people who think they have taught a cat to use the litter box.  (Duhh, that’s what cats do!)  The truly amazing fact is that so many people have studied a language in school for 7, 8 or 9 years and still can’t speak it.  If the people in charge of those language courses were cat owners, there would be feces everywhere!

“Everything works!” is an important idea for teachers because it is the antidote to the tyranny and dogmatism of obsessions with methodology.  Don’t get me wrong, I’m not saying that teaching should be method-less.  On the contrary, I think every teacher should have control of the theory and practice of a dozen different methodologies, and have another half dozen in mind that haven’t been fully developed.  The sad truth is that if you asked the average university teacher what his methodology is, he wouldn’t understand the question.  (Is “standing at the front of the room and talking” a method?  Oh, wait a minute, last week I used a power-point presentation.  Is that a method?)  And tenured university professors are supposed to be at the pinnacle of the pedagogical pyramid--they are certainly the most privileged and best paid.

The media, administrators, institutions and specialists love to announce that a new methodology is going to solve all of education’s problems, including ones that have yet to be encountered.  My former boss, who was a pretty good ESL teacher in his day, used to describe the meetings he attended in Ottawa (where all the “big” decisions about language teaching across Canada were made) sardonically.  As he recounted,  everyone was looking for the next “silver bullet” solution--a methodology that everyone would use and would solve every problem,  the ultimate panacea, the single medicine that everyone would use to cure every disease.

The problems with this administrative daydreaming are multiple, but at the top of the list is the fact that this obsession with methodology seems to invariably lead to a neutralizing and nullifying of the effect of good teachers.  Any science experiment is designed to eliminate variables, so perhaps we shouldn’t be too surprised that pedagogues looking at a learning situation from a distance are always trying to find a way to eliminate the teacher variable.   The 60 Minute expose on the Khan Academy is a pretty good example of what I am talking about.

The Khan Academy began with Salman Khan trying to help out his cousin by given her some extra online instruction.  In simple terms, a good teacher (Khan has all the markers: hard working, knowledgable of his field, unassuming, generous, straightforward and enthusiastic) making good use of the technology for a motivated student, but big money (aka Bill Gates) and big institutions with encouragement from the media are transforming his work into a methodology which they are calling “flipping the classroom.”  To Khan’s credit, in the interview I saw, he did his best to shy away from the “silver bullet,” methodological claims.  “Flipping the classroom” implies that students do the “learning” at home on a computer and come to school to do the “homework,” solving the problems and completing exercises.  In this new scenario teachers become a custodial presence, hovering in the background--the least essential cog in a technologically advanced wheel--while their students work by themselves on computers.

Am I saying the Khan Academy doesn’t work?  No, I’m saying everything works! The technology, resources and knowledge base that the Khan Academy provides can be valuable tools for skilled teachers to use.  It should not be used to undermine the effectiveness, influence and individuality of classroom teachers.

How did I become so jaundiced about methodology?  I’m not, but my first six weeks as an ESL teacher for the Department of National Defense I was obliged to intensively learn and then follow the Audio-Visual Method in my own teaching.  The core of the method was to show pictures to students and require that they repeat, chorally and individually, a particular affirmative sentence that corresponded to that picture.  Then they would have to learn a yes/no question that required the newly-learned response, and then a “wh” question.  Got it?  Here we go: 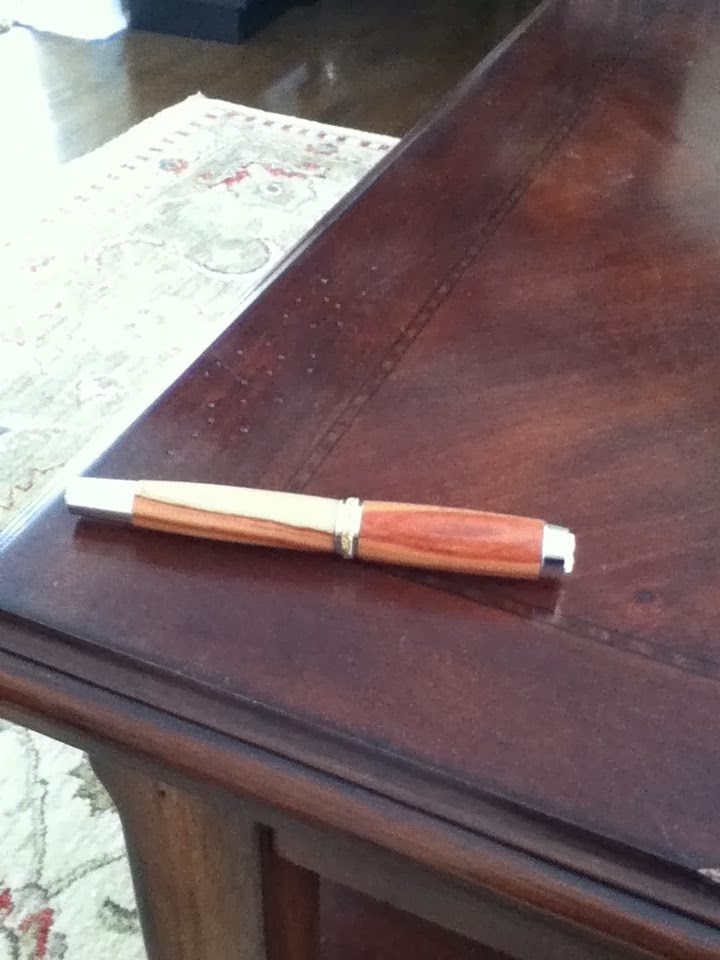 Everybody repeat now:  “There is a pen on the table.”

Excellent, and now the yes/no question:  “Is there a pen on the table?”

Having practiced this for 30 minutes of so, we can move on to the “wh” questions and, for fluency, contractions.

The process is actually kind of fun for about 45 minutes, but imagine doing this for 5 hours a day, 5 days a week.  It was mind-numbingly boring, equivalent to Chinese water torture.  Of course, when you are working for National Defense the fact that something is boring is no reason not to do it--almost the opposite.  Pain is good!  So all we teachers had workbooks that we were required to follow and there were Senior Teachers patrolling the hallways who could drop into our classrooms at any time.  We teachers figured out pretty quickly that no-one was going to learn to speak English by doggedly following this method.  Behind close doors we did all the things that “the method” did not permit:  offering translations, writing on the board and letting the students take notes (yes, note-taking was verboten for beginners), rehearsing skits, learning vocabulary from Playboy and Playgirl magazines, getting our students to listen to popular music with English lyrics, etc, etc, but always ready to switch to a choral drill from the workbook if there was a knock at the door.

My lunch with Gustine and Dave took place just as we were being allowed to emerge from the Dark Ages of the the Audio-Visual Method--so Dave’s enthusiasm for a new method was understandable.  We all agreed that the Audio-Visual Method really sucked (before this expression was current), and the teaching of language went through an intense period of methodological experimentation.  In pre-audio-visual teaching, I used what was called Grammar-based Instruction (following the erroneous notion that there is anything more than a tenuous connection between grammar and spoken English), but post-audio-visual I was introduced (and actually got certificates in) Criterion-referenced Instruction, Teaching by Objectives, Communicative-based Instruction, Communications Strategies, Suggestopedia, Student-Based Learning Strategies, Teacher Effectiveness Training, Real Materials Instruction, Educational Technology, TPR (Total Physical Response, which I really liked because it meant role-playing and theatre) and a bunch I can’t remember and some I invented myself, not to mention the tidal wave that followed computers coming into vogue.  I tried them all, and they all worked.

If you were applying for a language-teaching job during this period, the correct answer to the question “What method do you use?” was:  “I’m eclectic.”  In more general terms the shift was toward anything that could be called “communicative.”  Once again, the tendency was to have teachers step back and let students “communicate” as if through this process of not-teaching them students would, accidentally or through magical osmosis, learn English.  And, once again, it worked!  However, my favourite example of the “Communicative Method” not working was when the British Council at Reading University, where all the top gurus of the “Communicative Method” were employed, accepted a lucrative contract to teach a cohort of Libyan business men.  As the story goes, after a few days of the “Communicative Method,” the Libyan business men revolted because, in their view, the teachers were refusing to teach them, which sent all the leading lights of the Communicative Method running for their old grammar books and audio-visual materials.

And now the punch line of this posting:  after a number of years of teaching at the military college (where I taught as much literature as language), I was seconded back to the military base as a replacement language teacher for the summer.  Since I hadn’t taught basic level ESL for years, I was at a bit of a loss, and had little choice but to return to my old audio-visual materials and methodology, even though I knew perfectly well that a communicative approach had become pretty much de rigueur over the years.  I was surprised to discover that the students I ended up teaching took to the audio-visual approach with enthusiasm.  When their regular teacher returned, he approached me, with deference and concern, for an explanation of what I had done with his students.  His students were in rebellion because they wanted to be taught with the audio-visual approach, and nothing but the audio-visual approach would do.  I did my best to explain the audio-visual approach, and threw out all the expected cliches (“a change is as good as a rest,” “variety is the spice of life”) but ultimately, all I could tell him is that “everything works!”
at February 22, 2014