What Bible Translation Says about People Who Oppose Abortion

What surprises me about people who describe the Bible as “the word of God” is how blasé they seem to be about questions of translation.  Even a renowned scholar like Northrop Frye begins his book about the Bible, The Great Code, by glossing over the issue of translation quite glibly.  The translation process is always challenging and complicated.  It is very easy to translate inaccurately, to misconstrue meaning in the translation process, and very difficult to get a translation just right.  In fact, it is generally conceded that a perfect translation is an impossibility, some meaning is bound to be lost or changed as we move from one language and culture to another.  Even when the same word or expression exists in two different languages (which is not as common as you might think, and can create another problem called “false cognates”), the connotation of those words can be quite different in different cultures.  Apparently, describing someone as “a politician” in Mandarin is a complement, in North America, not so much.  As I learned living in Portugal, “ambitious” might be a complement in English, but in Portuguese it almost invariably implies corrupt.  The ways to go wrong in the translation process are multiple; the ways to get it just right are slim to none.  If you are really unaware of the problems of translation you might consider this old joke (or maybe it’s a true story):

Of all the translation controversies, none have been greater than those surrounding translations of the Bible.  Just to review the basic (if approximate) facts:  the texts which eventually became the Old Testament were written in a dialect of Hebrew.  The New Testament was written largely in Greek.  Eventually the 80 books of the Bible were translated into Latin.  Latin remained the principle language of the Bible for centuries, but the number of accepted books, the canon, was reduced to 66.  John Wycliff produced a hand-written version of the Bible in English in 1380.  Gutenberg produced the first printed version of the Latin Bible in 1450.  The Bible was subsequently reproduced, re-edited and retranslated into other editions in English and various other languages.  The first complete Bible (both Old and New Testaments) was produced in 1560, and is known as the Geneva Bible, and was the basis of most of the versions of the Bible which followed.  In 1605, King James of England commissioned a new edition/translation of the Bible and it was published in 1611.  Although hundreds of other versions of the Bible were/are available, the King James Bible has generally become the authoritative version of the Bible in English.

So, what about abortion?  Here’s what the King James Bible says about causing the death of a fetus:

22 If men strive, and hurt a woman with child, so that her fruit depart from her, and yet no mischief follow: he shall be surely punished, according as the woman’s husband will lay upon him; and he shall pay as the judges determine.

It seems quite clear to me that the author of this passage did not consider a fetus to be equivalent to a human life.

On the other hand, according to the passage immediately preceding this one, if a man beats his servant or his maid to death, he should be punished but not for murder.  If the servant survives for a couple of days following the beating, then the master escapes any punishment:  “he shall not be punished: for he [the servant] is his [the master’s] money."

(If you find this last bit curious, you might want to have another look at Graeber’s Debt:  The First 5000 Years where he discusses how people, especially women [or “cumal”], were used as money.)

On the other hand (yeah, I’m running out of hands), to compare with the punishment for causing the death of a fetus, the punishment for cursing your parents is death:  “17 And he that curseth his father, or his mother, shall surely be put to death.”

Not to lose the simple basic point, according to the King James Bible a fetus is not a human life nor is it equivalent to one.  The King James Bible does not support the basic foundation of the anti-abortion, pro-life movement. For people who might find the language of the King James a bit tough to follow, here is the New Revised Standard Bible’s version of the same passage which spells things out in more common English:

22 When people who are fighting injure a pregnant woman so that there is a miscarriage, and yet no further harm follows, the one responsible shall be fined what the woman’s husband demands, paying as much as the judges determine. 23 If any harm follows, then you shall give life for life, 24 eye for eye, tooth for tooth, hand for hand, foot for foot, 25 burn for burn, wound for wound, stripe for stripe. 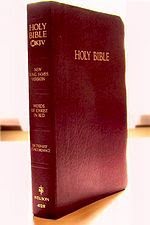 And finally, I get to my point.  Here is the same passage as translated and adapted by a committee hired by Thomas Nelson Publishers to produce the New King James Bible in the 1970s:

22 “If men fight, and hurt a woman with child, so that she gives birth prematurely, yet no harm follows, he shall surely be punished accordingly as the woman’s husband imposes on him; and he shall pay as the judges determine. 23 But if any harm follows, then you shall give life for life, 24 eye for eye, tooth for tooth, hand for hand, foot for foot, 25 burn for burn, wound for wound, stripe for stripe.

Notice how “miscarriage” and “her fruit depart from her” are now being translated as “she gives birth prematurely.”  There are lots of passages in the Bible that I don’t completely understand, but this time it seems obvious that we have gone from a fairly clear, coherent passage to a stretch that doesn’t make sense in a modern context and would have made even less sense at the time the Old Testament was being written.  Imagine you bump into a pregnant woman (today or thousands of years ago) and no “harm follows,” she gives birth to a healthy baby (even if premature).  Would there be any discussion of a crime, or penalty or punishment?  For what?  The Biblical passage only makes sense if what is at issue is a miscarriage.