I still remember from my first-year-undergraduate “Philosophy of Mind” course that the human brain is incapable of thinking, imagining or understanding one thing in isolation without bringing in another, a background, a difference, an opposite.  You can test yourself by trying to think of just one thing.  The notion of a dialectic is based on the binary functioning of the mind; every concept contains its opposite:  the notion “long” requires “short,” “big” invokes “small.”  In an even more rudimentary fashion, in order to know a “thing,” you must be able to say what is “not that thing.”

No, there isn’t, but the trickle-down effect of postmodern intellectualizing results in something like this claim from the online “Postmodern Literature Dictionary”:

“If you use ‘binary thinking,’ you are a person who sees no gray, no fuzziness between your categories. Everything is black or white.”

In postmodern speak “binary thinking” has become a synonym for the already well-known and understood idea of “simplistic thinking,” again with the implication that those “non-binary” thinkers must be smarter than the rest of us. How did we arrive at this “two legs bad” juncture? 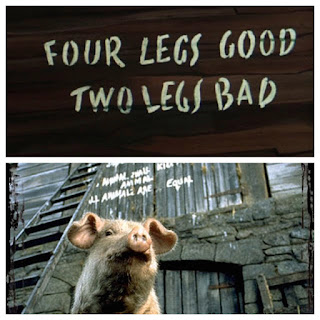 Semiotics is a form of structuralism, for it argues that we cannot know the world on its own terms, but only through the conceptual and linguistic structures of our culture. [. . . .] While structuralism does not deny the existence of an external, universal reality, it does deny the possibility of human beings having access to this reality in an objective, universal, non-culturally-determined manner. Structuralism’s enterprise is to discover how people make sense of the world, not what the world is.  (Fiske, 115)

Fiske’s description anticipates the core dispute in the the feud which will eventually take place between postmodernists and empirical scientists like Sokal as I have described in my post The Postmodern Hoax.  Current repudiations of “binary thinking” find their origin in a paper delivered by Jacques Derrida at a structuralism conference at Johns Hopkins University in 1966 entitled  “Structure, Sign and Play in the Discourse of the Human Sciences”.  (The French-language original, "La structure, le signe et le jeu dans le discours des sciences humaines" is slightly more readable than the English translation.)

In this essay, Derrida dismantles (Derrida uses the term "deconstructs") the work of anthropologist Claude Lévi-Strauss, in particular Lévi-Strauss's The Raw and the Cooked.  Although Derrida never explicitly refers to "binary thinking" or "binary opposition" in his essay, it is understood that the structure Lévi-Strauss uses, derived from the linguists Saussure and Jacobson and all of structuralism, is the binary functioning of human thought, and is the target of Derrida's critical inquiry into the "structurality of structure" (“Structure, Sign and Play in the Discourse of the Human Sciences”).

The Longman anthology Contemporary Literary Criticism, in addiction to a translation of Derrida's paper, offers in addendum a transcription/translation of the discussion which took place between Derrida and the leading lights of structuralism immediately after his presentation.  It's interesting to see some of the finest minds in structuralism struggling to understand what the hell Derrida was talking about and, at the same time, to see Derrida cornered into giving a straightforward definition of "deconstruction."   Okay, "straightforward" is never a word that can be applied to Derrida, but with my ellipses eliminating all the asides and parentheses this is what he said:  "déconstruction [. . .] is simply a question [. . .] of being alert [ . . .] to the historical sedimentation of the language which we use [. . .]" (497). This is the definition of "deconstruction" that I typically gave students and, at the same time, I pointed out that even though "deconstruction" was suppose to be something innovative, radical and distinctly postmodern, the Oxford English Dictionary has been"deconstructing" the English language for literally hundreds of years--meaning that the OED gives you the multiple meanings of a word and the year ("the historical sedimentation') in which a particular meaning/definition can be proven to have come into usage.

Back to structuralist anthropology. As Fiske explains:


The construction of binary oppositions is, according to Lévi-Strauss, the fundamental, universal sense-making process. It is universal because it is a product of the physical structure of the human brain and is therefore specific to the species and not to any one culture or society. (116)

Contrary to popular understandings of "binary thinking,"  the whole point of structuralist anthropology (the binary approach) is to understand how societies, through their mythologies for example, deal with the failures of and exceptions to binary opposition.  Fiske applies the Lévi-Strauss approach to a Western and concomitantly demonstrates how the approach teases out subtextual themes at play in the movie, and how this particular interpretation of the film might stretch credibility.  Even today, 50 years later, it is difficult to fathom exactly what new, radical, distinctly postmodern objection Derrida is raising.

Certainly it makes sense to challenge how binary thinking is applied in a particular case.  The objection isn't to binary thinking but to a particular application.  If you are going to launch a campaign against food on the grounds that it causes obesity, you should at the same time be ready to present an alternative to eating food, something that goes beyond the absurd claim that "eating food is bad."