When I was in the hunt for a tenure-track university position, I attended a mentoring session on how to publish led by Linda Hutcheon, who was, at that moment, the newly hottest thing in Canadian postmodernist theory and criticism.  “Writing a thesis,” she told us, “was an exercise in covering your ass.”  There was nothing shocking or striking in her declaration; it was a well-worn bromide, a truism.  No-one in the audience blinked.

I began my teaching career giving one-on-one instruction in administrative writing (among other things) to civil servants working for the Government of Canada.  Those were the days when “writing style” meant being able to express yourself in clear, crisp and concise prose (without overdoing the alliteration).  Around the same time, a journalist, with the Ottawa daily, The Citizen, wrote a regular column on effective writing.  In one of his articles, he constructed the following fable to explain why and how government administrators deliberately wrote poorly:

Middle managers write poorly, with purpose, using inflated language which might sound good to unwary ears, but leaving the message unclear, in order to escape responsibility for what they have written.  They cover their asses.  We unwittingly (or is it deliberate?) train university students to do the same.

The markers of defensive, cover-your-ass writing are pretty easy to spot:  passive voice, inflated, ambiguous vocabulary, un-contextualized jargon, confusing metaphors, and vague pronoun references.  Passive voice:  that’s when, instead of saying “John threw the photocopier into the trash,” you say, “The photocopier was thrown into the trash.”  With the passive voice you can avoid making anyone responsible for an action—at least until the boss comes nosing around. Inflated, ambiguous vocabulary and jargon need no explanation:  “render it inoperative” mis-speaks for itself—and I’m sure you have lots of examples of your own.

Even though I spent a career in the metaphor business (a lit prof remember), I have come to detest how metaphors are used in daily life, not to clarify a point but to escape clarification.  This morning I heard VP Joe Biden (I like Joe) telling the people of the Ukraine “you have a tough road ahead, but the USA is going to walk that road with you.”  Metaphors are what politicians use to sound reassuring while promising absolutely nothing.

I still remember when a university administrator accused our research project's computer technician of “making spaghetti” and later when discussing database management that we “didn’t want to put a Volkswagen engine in a Cadillac.”  I suddenly understood how an administrator could spend four hours in a meeting without ever saying anything useful . . . by speaking metaphorically.

Vague pronouns are probably the most common and seemingly innocuous way that writers can lead you in dizzying circles and avoid saying anything that can be grasped.  A pronoun is by definition a word which stands in for a noun.  A pronoun is doing it’s job if (with occasional exceptions called “empty pronouns”) we can clearly and easily identify the noun which the pronoun is standing in for.  Example: “Mary stood waiting in the rain without an umbrella crying for half an hour, and she said it was my fault.”  What noun should replace the pronoun “it” in this sentence?  See the problem?

Of the many ways we train students to write poorly (for example, by refusing to address the issue, endlessly passing the buck on to a fictional someone else who will magically solve the problem), the way we most actively encourage students to write unreadable prose is to present them with examples of bad writing suggesting that they are evidence of genius and, implicitly, the models students should be following. 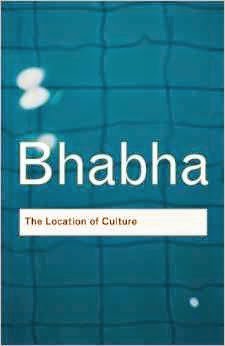 Now that you have your BS monitors turned on full, consider this passage from The Location of Culture in which Homi Bhabha defines his concept of “Third Space.”  I should explain that this book was repeatedly presented to me in graduate theses I was examining or supervising—requiring me to read it cover to cover.  Bhabha is a Harvard professor and his work is generally considered essential reading for students in the humanities and cultural studies.  “Third Space” is the concept for which he is best known.

If you are a good-hearted, well intentioned person (which, by the way, most students are), you will attempt to understand, to make sense of, the passage.  I don’t want to stop you from trying to understand what you are about to read, but my intention is to demonstrate in terms of a few simple rules of English composition why and how this passage verges on incomprehensibility (maybe not “verges,” just “is” incomprehensible).

The linguistic difference that informs any cultural performance is dramatized in the common semiotic account of the disjuncture between the subject of a proposition (énoncé) and the subject of enunciation, which is not represented in the statement but which is the acknowledgement of its discursive embeddedness and address, its cultural positionality, its reference to a present time and a specific space.  The pact of interpretation is never simply an act of communication between the I the You designated in the statement. The production of meaning requires that these two places be mobilized in the passage through a Third Space, which represents both the general conditions of language and the specific implication of the utterance in a performative and institutional strategy of which it cannot ‘in itself’ be conscious. (54)
Did you give up after the first sentence because of the vocabulary?  No doubt if you admitted to some cultural-studies scholar that you didn’t understand this passage, he would tell you that you need to understand that “linguistic difference” is a reference to Saussure and Derrida, “cultural performance” alludes to the work of Judith Butler, “semiotic account” comes from Saussure and the subject of the enunciation versus the subject of the proposition refers to basic linguistics but Anglo-Americans associate this distinction with Lacan.  The word “disjunction” is one that Sokal (see my previous post) would draw our attention to because it has a very specific meaning in logic, mathematics and biology.  In common language is just means a disconnection or separation.  We have no way of knowing if Bhabha is using this word in the common everyday sense or in a more specific scientific sense.  What we can attest is that he is laying on the jargon as thickly as possible, with little or no indication that it is clarifying what he wants to say.
However, what I want to draw your attention to is the word “which” in the first sentence.  “Which” is a relative pronoun.  According to the basic rules of composition, a relative pronoun, all things being equal, should refer to the closest noun or noun phrase, its antecedent. The first word “which” in Bhabha’s sentence is preceded by six different noun phrases.  If Bhabha isn’t following basic rules of composition, then the second half of his sentence can have six completely different meanings, and it would be impossible to know which of the six he is intending.  Therefore we must credit Bhabha with following this basic rule and we can substitute “the subject of the enunciation” for “which” and we get: “the subject of the enunciation [ . . .] is not represented in the statement.”  If you happen to know what “the subject of the enunciation” means (roughly, the person speaking) you will understand this statement because it is an analytic truth.  "Subject of the enunciation" means the subject not in the statement. Bhabha's sentence is the equivalent of you saying “My friend John is a bachelor, who is not married.”  Thus far Bhabha isn’t telling us anything; he is simply expressing a redundancy, repeating what anyone who knows the expression “subject of enunciation” would already know.
Are you still with me?  Did you notice that in the first sentence there are five pronouns?  “Which,” “which,” “its,” “its” and “its.”  The way these pronouns are lined up they all refer back to the same noun phrase:  “the subject of the enunciation.”  If we plug in the noun phrase for each of the pronouns we can see what Bhabha is saying in simple syntax.

Bhabha’s next sentence—“The pact of interpretation is never simply an act of communication between the I the You designated in the statement”—is also an obvious truth, but at the same time it is misleading or at least confusing because now we have to wonder if we are still talking about the difference between the subject of the enunciation and the subject of the proposition—the topic sentence of the paragraph.

In the next sentence Bhabha reveals his great concept, his claim to fame the “Third Space” (always in capitals to make the point of its grandeur no doubt): “The production of meaning requires that these two places be mobilized in the passage through a Third Space [. . . ]. “  Back to pronoun reference:  if “these two places” refers back to “I” and “You,” then the “Third Space” seems so obvious that it hardly warrants a special name.  Yes, there is always a space of mediation between two people communicating which affects the communication  process.  What does this have to do with the topic sentence of the paragraph, the difference between the subject of the enunciation and the subject of the proposition?

Then we have another series of four pronouns:  “which,” “which,’ “it” and “itself.”   Playing our substitution game we get:
In phrase 2 above, we see an example of an out-of-control metaphor.  Specifically, we see “Third Space” being converted to a personification (what used to be called “pathetic fallacy”), something reified as capable of consciousness (which in this specific case cannot be conscious of a particular something).  Does this metaphor, the personification of “Third Space” help us understand what it is?  I think not; quite the opposite.  If the “Third Space” is a way to designate how communication between two people is mediated, then it is quite a simple concept, but the introduction of the metaphor of consciousness together with a flurry of verbs and verbal phrases which imply personification and whose exact meanings are always hard to pin down—“inform,” “dramatize,” “is the acknowledgement of,” and “represent”—guarantee that this simple concept will remained covered in a thick fog of confusion.

Whatever we might think of this passage, it isn’t good exposition, and we should not be holding it up to university students as a model they should follow in their own writing.

I admire the cartoonist's ability to make the point in a brief and entertaining fashion. 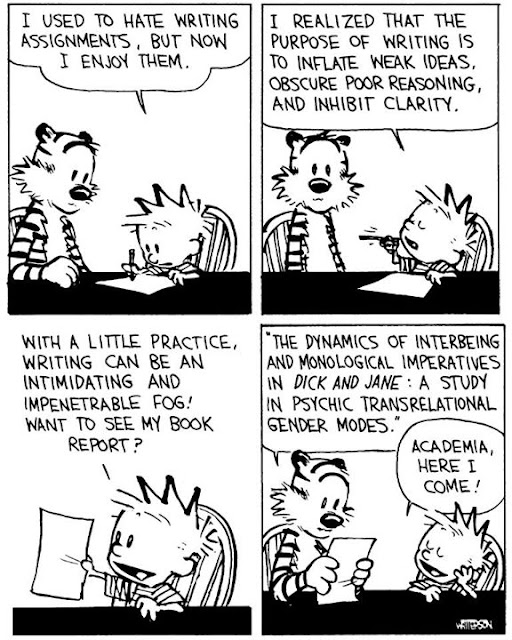